Today’s generation of teenagers and young adults represents a unique class of Internet users, born with the web at their fingertips and an innate ability to navigate it with agility. For this generation, the Internet was not a new technology upending other modes of communication – it was the norm. Most grew up learning to seek out information primarily through search engines instead of card catalogs, engaging with social networks to interact with peers, and watching online video for entertainment.

How will the early adoption of online behaviors among young people impact future activities such as managing finances and making health care decisions? As those under age 25 grow up in an increasingly connected world, one can surmise that these users will be able to quickly and seamlessly adopt online approaches to everyday matters more than any generation before it.

One of the defining issues of the next generation will be health, as we observe both the increasing incidence of many troubling diseases like diabetes but also extraordinary advances in medicine and health care. If we take a look at how young people currently consume health information online, it offers us some insight into what the future online health activity might look like and which content providers stand to benefit.

Young People Are Highly Social Entertainment Consumers
An analysis of U.S. Internet users between the ages of 12-24 reveals that they are heavy consumers of social media and entertainment. In October 2011, this age segment comprised 22.8 percent of the total U.S. online population and spent more than a quarter of their time on the Social Networking category of sites (26.6 percent) – a rate 58 percent higher than that for the average U.S. Internet consumer. Teens between the ages of 12-17 spent an even greater share of time – nearly 29 percent – on social networking, 71 percent greater than the average Internet user.

Next to social networking, 12-24 year-olds spent an eighth of their time on the Multimedia category, 91 percent greater than average. Meanwhile, 12-17 year-olds spent closer to 15 percent of their time on multimedia, more than double the average share. For both the Social Networking and Multimedia categories, 12-24 years old spent the most amount of time compared to other age groups. 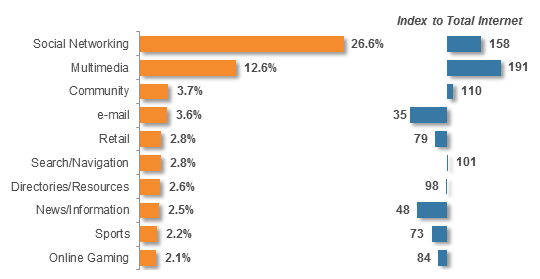 Among the sites visited most by young people ages 12-24, Google Sites ranked as the most visited property, reaching 90 percent of the demographic and accounting for 16.3 percent of all time spent online. Interestingly, YouTube accounted for nearly three-quarters of the time spent on Google Sites. Facebook, which ranked as the second-most visited site, accounted for the greatest share of time spent online at 23.2 percent. 12-17 years old spent an even greater share of their time on both Facebook (25.1 percent) and YouTube (13.9 percent).

How Young People Consume Online Health Information
In contrast to the aforementioned online activities among youngsters, 12-24 year-olds spent the least amount of time visiting the Online Health category when compared to other age groups. This fact is perhaps unsurprising given that older age segments likely have more health care concerns to manage – for themselves and for their families. Nevertheless, 12-24 year-olds represented 21 percent of Health category visitors -- the second largest demographic after 35-44 year olds – an indication that they are a demographic that ought to be addressed in this sector.

In October, 61.5 percent of the 12-24 year olds visited a Health site, a 9-percent increase from last year. Some of their Online Health visitation habits resemble that of the broader Internet population; for example, their most visited Health properties included WebMD Health, Everyday Health, and Livestrong - eHow Health.

However, the younger segment also exhibited some different browsing patterns. They were most likely to visit lifestyle-oriented health sites, such as Lifescript.com and Bliss.com, both of which ranked among the top 10 sites for 12-24 year-olds. Lifescript’s content is divided into five simple sections: Health, Body, Food, Life, Soul. Bliss.com also strongly communicates an integrated approach to health with its content sections: Eat Well, Get Fit, Head to Toe, Wellness, Sanctuary, Do Good. That younger Online Health consumers show an affinity for these sites suggests they may view health as an integrated part of their lifestyle and do not only go to health sites for informational purposes. 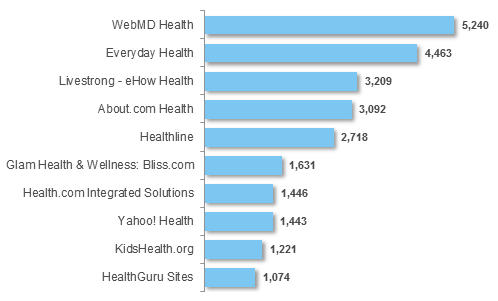 So although young people spend less time on health websites than their older counterparts, they are still an important segment of the health information consuming public. As members of this demographic mature, they are likely to become even more engaged with health content. But their trust and affinity for health information brands is being cultivated right now, and it is the brands that understand how health integrates into their daily habits and lifestyle that will garner their loyalty in the future.