Is the Era of Webmail Over?

Is the Era of Webmail Over?

As a working professional, I spend about 30% of my time reading and writing emails. Outside of work, I find that I am spending less and less time in front of a computer on personal emails. As digital communication continues to evolve so too have consumers’ behaviors. Web-based email, which for many years was on a continual growth curve, is now seeing declining usage across many geographies throughout the globe as consumers are offered a growing number vehicles to digitally communicate.

Globally, total minutes spent on web-based email (note this does not include PC web applications such as Outlook) was down 2 percent in November 2010 versus November 2009, with time spent in the Asia-Pacific region showing even more dramatic decline dropping 10 percent. Within the region, markets showed varying levels of engagement trends. The largest decline in time spent was seen in Malaysia (down 22 percent), India (down 19 percent) and South Korea (down 15 percent). Taiwan, Hong Kong and New Zealand on the other hand actually showed increases in overall minutes spent in the category. 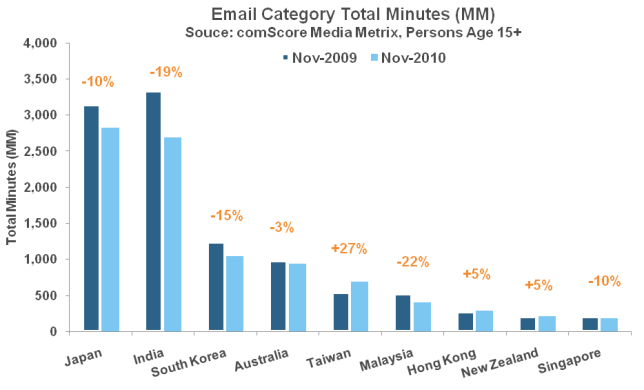 What or Who is Driving the Web-Based Email Exodus?

When looking for the email declining culprit look no further than the demo segments that usually begin online trends – young users. Analysis across the market showed that younger users most often exhibit the strongest change in email behavior, driving down overall category engagement. A look at Malaysia for instance revealed that although there are more unique Internet visitors across all age segments, young users are showing the strongest decline in email visitation. Visitors age 15-24 visited web-based emails 16 percent fewer instances than a year ago, while those ages 25-34 declined 7 percent. Even persons age 35-44 experienced a 6-percent decrease in visitation to email sites. Older demographic segments saw more users visit email destinations with those 55+ growing 14 percent, as once again age marks a major difference in consumption patterns. 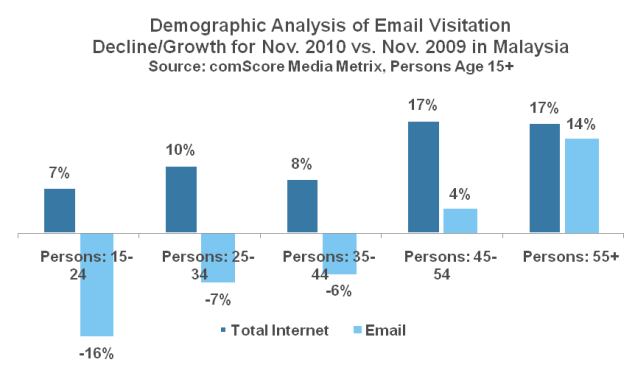 We now know web-based email isn’t capturing the same level of engagement and visitation it used to in many markets, and it is obviously not because we communicate less with each other. Humans are now more connected that ever before. The question is where and how are people communicating digitally? There are a few key trends to consider here in the evolution of digital communication, but the most important are social networking and mobile. 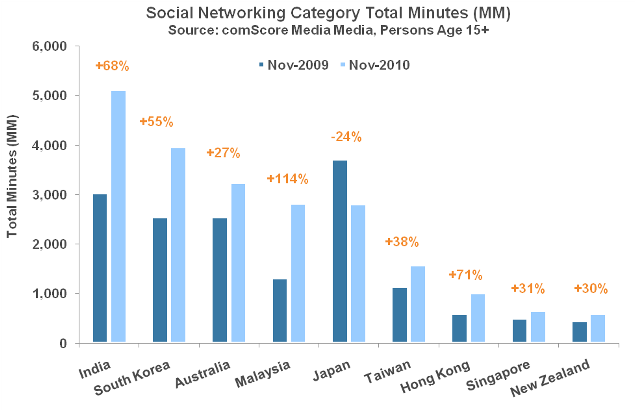 Another theory on the decline of web-based email usage: people are turning to their mobile devices to email and communicate. In the U.S. for instance (which has also seen the web-based email declining phenomenon), mobile email usage has grown 36 percent in the past year. In Europe, mobile email users grew 55 percent in the past year. In Japan, 53 percent of users access email via their mobile in September leading as one of the top mobile behaviors in the market. Whether for work or personal email use, mobile offers the convenience of staying in the loop no matter where you are, and for some couch potatoes sitting at home, it offers a quicker way to check your inbox even when there is a PC at your disposal. Let’s not forget the approximately 9 million iPads that have been sold and gives you apps for accessing your mails. With the tablet market set to explode this year, this is yet another device that supplants web-mail usage.

So what does this mean for marketers?

It’s not that people are communicating less and that is why email usage is declining - they are actually communicating more but just through an increasing amount of channels. So the era of email isn’t over per se, it’s just evolving as all communication channels have throughout history. The digital landscape just makes those changes happen a lot more quickly, and distinct communication channels will become blurred. Google launched Buzz last year to try to integrate social into email. Coming from the other way, Facebook recently offered email accounts. The term “email” will soon become as outdated as the “telex”.

This post was originally published at ClickZ.asia on January 19, 2011.

Leveraging All Platforms to Win Over Latinx Audiences in Beauty