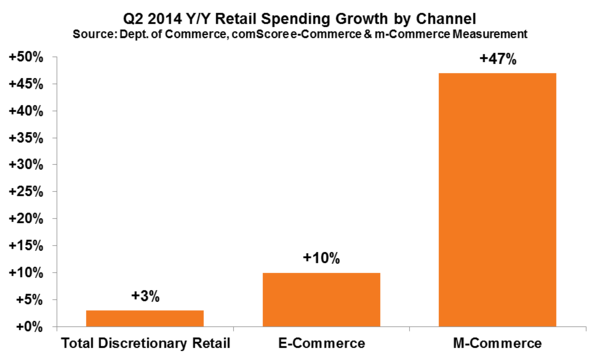 The 47% gain is a headline-worthy number to be sure, but let’s unpack that number a bit to understand why the quarter was so strong and what it really means for the future growth of m-commerce. One factor that significantly benefited the growth rate for the quarter was a pretty favorable comparison to the same quarter last year. You can see from the chart below that, prior to this year, m-commerce tended to see a seasonal share dip during the spring months. This actually makes sense given that m-commerce is still an emerging market, and we often see these behaviors amplified during both the peaks and valleys throughout the year (in this case, strong in Q4 and weak in Q2). 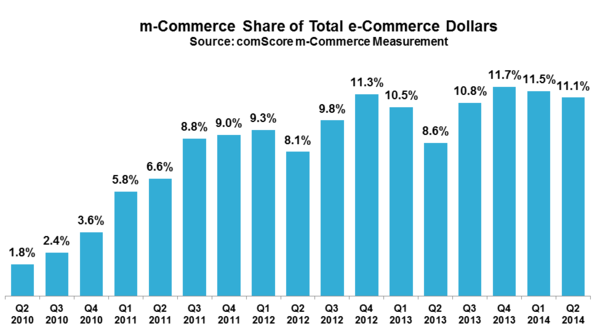 Even though the 47% growth rate is impressive, m-commerce as a percentage of total digital commerce was not exceptionally high at 11.1% – it was just high relative to previous Q2s, which were soft for m-commerce relative to other quarters.

Another interesting dynamic during the quarter was the increasing importance of tablet commerce. While smartphones have historically accounted for more than 60% of m-commerce spending, the more rapid growth in  tablet ownership in recent quarters allowed tablets to account for 46% of m-commerce spending in Q2 and see a 75% growth rate vs. year ago (as compared to 29% growth in spending using smartphones). 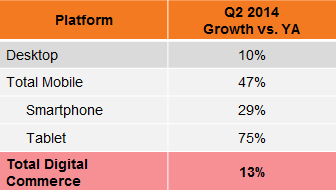 So what should we ultimately take away from this huge gain in Q2 m-commerce spending? Is it a sign of huge things to come for m-commerce or just a one-time bump?

The reality is probably somewhere in the middle.

It is very telling that the pronounced softness seen in previous years’ second quarter did not happen this year – a sign that perhaps the base of m-commerce buyers is finally solidifying and becoming more consistent throughout the year. A more solid base of buyers means a better foundation for growth in the coming months. And as buying expands to more platforms – particularly tablets – consumers will only become more comfortable purchasing via mobile.

While it is highly unlikely to see growth rates in excess of 40% in the Q3 and Q4 this year, it is very possible that the numbers will come in solidly in the 30% range. If that happens, then 2014 m-commerce spending looks to be headed for around $35 billion – not far behind the size of the entire digital advertising market. As m-commerce grows into a more mature transactional medium over the next few years, it’s clear that omni-channel marketing will become an even more important – and likely more challenging – issue for marketers.