At a time when we’re working from home, many of us for the foreseeable future, I believe more than ever that the things we engage with on social are more and more indicative of what we do offline.

And one thing that is clear from the social data is that this summer Streaming and OTT shows were surging on social more than broadcast, cable, premium cable and syndicated shows.

Consider the following, between June and August, we looked at the average Unique Engaged Audience across Facebook, Twitter, and Instagram. Streaming and OTT shows saw an average of a 60% gain in the total number of distinct people that took a single point of engagement with a post from a streaming TV show – Twitter seeing the highest with a 65% lift. Even on Instagram and Facebook, these streaming shows saw 52% and 62% gains, respectively, during the same period.

Now, consider that the average U.S. brand only saw an average of a 37% gain on Instagram, a 11% gain on Facebook and a 32% gain on Twitter – and the numbers and success of streaming begin to crystallize in their social star power. By looking at the gains compared to previous months, we can go under the hood of the car and really see what shifts are happening in the human consumption patterns. 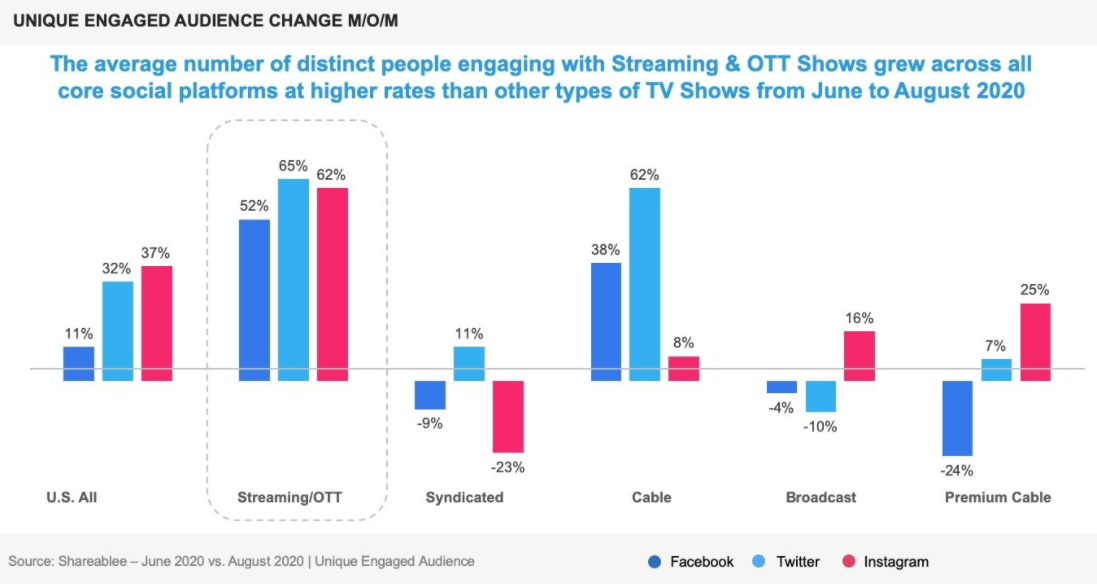 Let’s take a look at the big numbers. In August of this year, Streaming & OTT shows collectively saw nearly 43M Actions on Instagram alongside another 32M on Facebook and 9M on Twitter. That’s a combined 84M+ Actions across these three social platforms. From a video perspective, more than 690M video views occurred on Facebook and another 83M on YouTube.

Why does all this matter? Because Media and Entertainment as a vertical makes up a significant portion of social engagement. But also, because an article out by  Adweek notes, “In May, 80% U.S. consumers subscribed to at least one paid streaming video service.” The article goes on to state, “That number is up from 73% at the end of 2019, showing just how much the pandemic has affected the subscription streaming video landscape.” That same article, though, also notes that churn on these subscriptions is also up.

So, what should we make of this? I think we’re seeing a shift that is likely decades in the making…from reliance on favorability to a particular network to the intersection of content and convenience. In short, the curation of on-demand content has changed the way we consume our shows (aka content). We binge. We move to the next show. We binge. Rinse & Repeat. The demand for fresh content is now flowing at the speed of information travel on social. Instant and faster. This does, however, mean that content creators in the space are really only as top-of-mind or relevant as their last big hit show. And using the success of one staple as the ‘lead-in’ to a new show to build a base for it is now tougher than ever.

But it also opens the door to a new wave of advertising… social addressable.

Social is so personal. It’s meaningful. It’s relevant. It’s on our phones. The things we engage with on social are the things we consider, we like, we feel add value – the things we buy.

So for agencies and advertisers, using cross-engagement social data can unlock critical ad buys that go beyond the branded content space. It opens the door for using the social engagement patterns to place linear TV buys in a way that places the advertiser in front of the best shows.

What does that look like? Let’s take the example of Honda. Not all shows are going to be the right fit for this advertiser. Maybe they want to advertise on linear with FOX. Using affinity data, they’d see that their engaged base of Honda socialites is 52x more likely to engage with Family Guy than the average engaged social person in June, followed by 24 Hours to Hell and Back with an affinity score of 46x, according to Shareablee data.

Flip the coin, though and there is an exceptionally low affinity to WWE Smackdown, The Masked Singer, The Resident, etc.

Since social engagers are already sharing, commenting, retweeting some of those high-affinity show posts; it’s likely they are the same people watching – so if they were to see Honda on the TV in that show, it would feel – natural and organic to them. Right show. Right eyeballs. Right engagers.

And for publishers, this is a win for them too. When the next proposal comes in for an advertiser, they’ll be armed with the ability to find that perfect partnership. Using data to supercharge social and…sales. A win-win scenario.

I’d love to stay connected with you, so if you found this article helpful and/or insightful, I’d love to hear from you. Contact us.

The Recipe For A New Currency