In a blog post earlier this year, I wrote about the challenges facing small e-commerce businesses, noting that their share of online spending in Q4 2009 showed a 4.2 point decline versus Q4 2008. Unfortunately, the situation hasn’t improved since then. In fact, it’s gotten worse. In Comscore’s Q2 2010 e-commerce webinar, I reported that larger retailers had gained 5.6 points of market share at expense of their smaller brethren over the most recent twelve months: 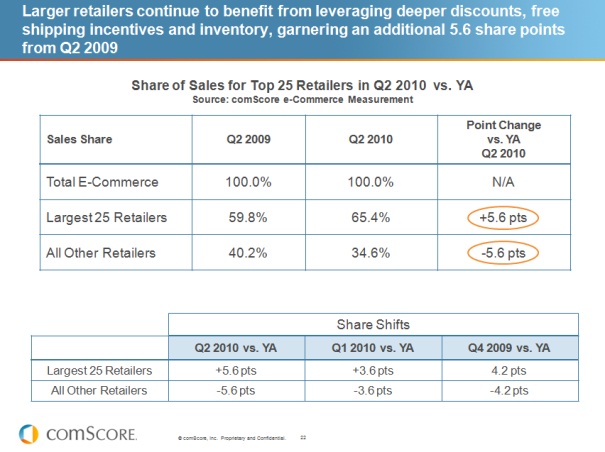 The market share loss suffered by the smaller retailers corresponds to an absolute sales decline of about 6%.

The most recent survey (PDF) conducted by the National Federation of Small Businesses (NFIB) in June of this year gives us some insights into the underlying problems. The NFIB says:

The Index of Small Business Optimism lost 3.2 points in June after posting modest gains for several months. The persistence of Index readings below 90 is unprecedented in survey history. The performance of the economy is mediocre at best, given the extent of the decline over the past two years. The small business sector is not on a positive trajectory and with this half of the private sector “missing in action”, the poor growth performance is no surprise.

The NFIB report goes on to say that the weak economy continues to put downward pressure on prices, concluding that widespread price cutting has contributed to small businesses’ sales declines. It seems clear to me that smaller retailers struggle to match the pricing power of their larger competitors.

The picture continues to be bleak on the hiring front, as well. Over the next three months, eight percent of small businesses plan to reduce employment (up one point), and 10 percent plan to create new jobs (down four points), yielding a seasonally adjusted net one percent of owners planning to create new jobs, unchanged from the May reading and positive for only the second time in 20 months. Since the third quarter of 2009, job creation plans have underperformed the recoveries from the other prior two deep recessions covered by the NFIB survey.

In my blog post earlier this year, I pointed out that in an ultra-competitive environment such as we have today, it’s especially important that small businesses stay close to their customers and that one way to do that is by leveraging the power of social media. With the continued growth in consumers’ use of social networks, that advice I offered then would appear to be even more appropriate today:

“I think that using social networking to build communities of customers and then reaching out to them with relevant and frequent communications holds a lot of promise, especially for smaller retailers. They should be able to execute better than their larger competitors. For one thing, they don’t have to deal with the internal organizational bureaucracy and delays that can hinder many larger companies when deciding how CRM / social networking programs should be executed. And, the use of social networking offers significant opportunities to reduce marketing costs, which will help smaller retailers overcome the challenge of their larger competitors’ greater financial resources.”

So despite the difficult environment for smaller retailers, there are still opportunities for growth. It will require using their ability to be more nimble and flexible in responding to consumer demands, and social media offers a great way to do that.

At the same time, it seems to me critical that the administration begin to figure out ways to promote job growth among small businesses. Policies that encourage hiring need to be pursued and anything that raises costs avoided. The small business “engine of hiring” urgently needs to be primed.