While we tend to focus much of our attention on retail e-commerce spending trends as a gauge of the U.S. consumer economy, it can be easy to overlook another important sector of e-commerce: online travel. Though it no longer drives the majority of online spending, it still amounts to $80 billion annually, or about 40% of total e-commerce. 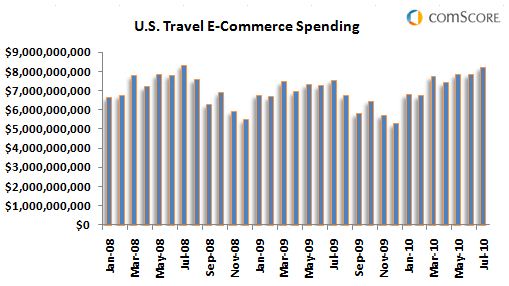 This strength is also evidenced in the Y/Y growth rates, where online travel spending growth reached 9% in July, representing the seventh consecutive month of gains. This is quite an achievement, considering this streak comes on the heels of eleven consecutive months of negative growth rates in 2009. At its nadir, which came in September 2009, growth rates had fallen to -11%. 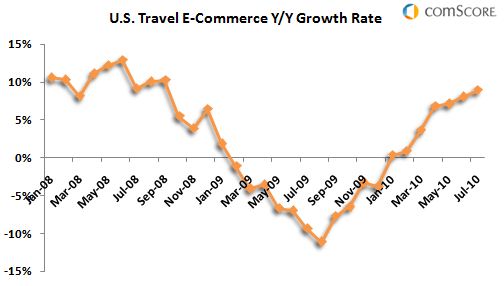 As demand in travel picks up, so has online advertising for the sector. In fact, the number of display ads among airline advertisers reached 3 billion in Q2 2010, up 67% vs. year ago. Southwest remains the top display advertiser among all airlines, accounting for 20% share of voice in the category in the second quarter, followed by American Airlines (13.0%) and Continental Airlines (12.4%). 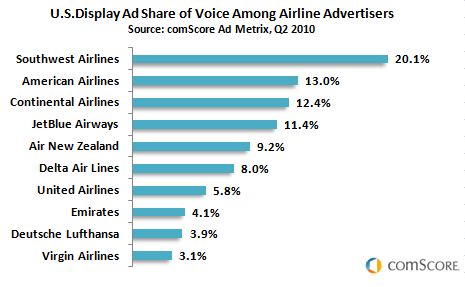 After a pretty tumultuous 2009 for many industries, it is nice to see some begin to bounce back from the recession. The online travel industry appears to be one such industry, and as online consumer spending in the sector increases, travel advertisers are allocating greater marketing expenditure to the digital channel.

But as the economy remains in a tenuous position, we can only hope that these trends will continue going forward.

Will travel’s comeback power through despite Delta variant?