When it comes to viewability measurement, the most common question we get from clients is, “What percent of my ads are in-view?” Immediately thereafter they want to know, “How does this compare to a typical campaign?” While the answer to the second question has always been (and continues to be), “There’s no such thing as a typical campaign!” we have now amassed a significant amount of data to help confirm this point and address some of the question marks swirling in the minds of advertisers, agencies and publishers. Today the Interactive Advertising Bureau (IAB) is hosting a briefing on viewability, and we wanted to share some of these results with you in time for that meeting.

The Topline Results: 54% of Display Ads are Not Seen
Comscore recently conducted an analysis of thousands of campaigns spanning a mix of global advertisers who ran their ads across a variety of publisher sites and ad networks/exchanges from May 2012 through February 2013. The key finding, which was first reported in the Wall Street Journal (subscription required), was that more than half of display ads – 54 percent, to be precise – do not have the opportunity to be seen by a consumer. This in-view rate is actually significantly lower than our initial vCE Charter Study research from January 2012. 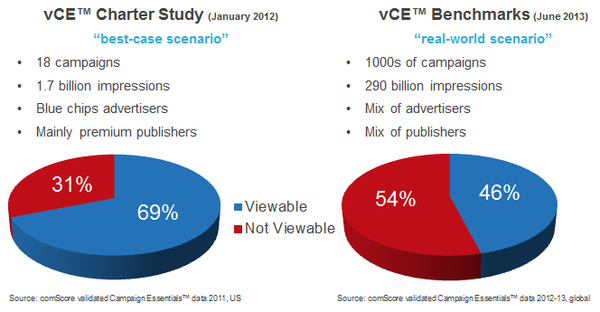 While the difference appears stark at first glance, it is actually not terribly surprising given that the vCE Charter Study involved a small sample of 18 campaigns that were delivered on mostly premium sites. At the time of the initial study, we knew that the viewability results represented somewhat of a best-case scenario. With thousands of vCE campaigns now under our belt, we are getting a much clearer view of where the reality may lie. It also underscores the need for consistent and robust research to help us better understand the dynamics of viewability and viewability measurement across the web.

Premium Publishers Boast Higher Average In-View Rates than Ad Networks/Exchanges
Not surprisingly, in-view rates can vary greatly depending on where the ads run. Our clients increasingly want to understand how in-view rates differ between ad networks/exchanges and premium sites.

While the definition of an ad network or exchange is well understood, there is no industry definition for premium sites. For the purposes of this analysis, we defined a premium site as any site having an average CPM of USD $5.00 and monthly ad revenue of $100,000 as reported in Comscore   Ad Metrix™. 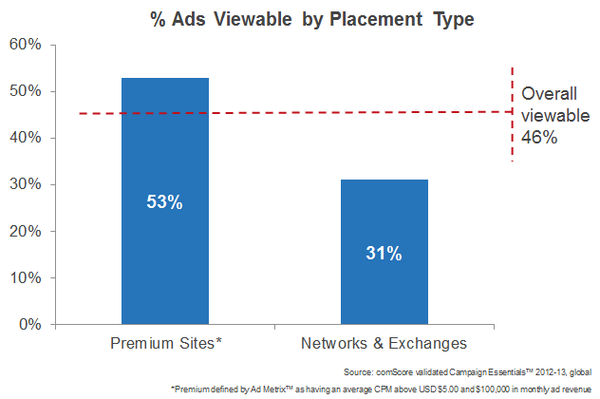 Viewability Rates Vary Significantly Between Individual Media Sellers
While these viewability rates give us a sense of how certain segments of the sell-side perform overall, the sizeable variation within each segment highlights just how important it is to evaluate the individual publisher or network on its own merits. The wide viewability ranges suggest that regardless of the publisher type, there are some members of the sell-side of the market who are delivering very strong in-view rates and others who are falling short on their intention to deliver valuable ad inventory to advertisers. 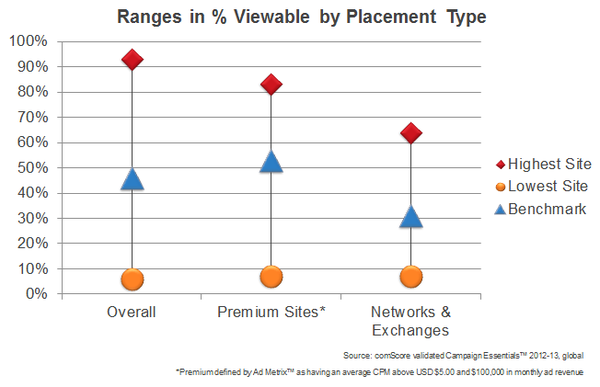