We recently conducted a set of studies for YouTube on behalf of cable TV advertising partners to determine the extent to which YouTube video ad exposure correlates with increases in TV viewership for show premieres. This innovative cross-platform research linked digital advertising exposure – on both desktop and mobile – with behavior on another media platform – television.

The study measured the likelihood of those exposed to recent YouTube campaigns for three cable TV show season premieres to tune in to those premieres (with two of those premieres also being series premieres). Results showed the campaign-exposed population had a 17% higher overall likelihood of viewership of the show premieres compared to the unexposed group. Given sufficient campaign investment, this higher incidence of viewership could translate into meaningful ratings boosts vs. what a show might otherwise receive.

While the study results clearly demonstrate the relationship between digital video exposure and TV tune-in behavior, further analysis of the results uncovered best practices for how to maximize this impact. Ad exposure was most effective when it occurred closest to the air date of the premiere and when potential viewers were exposed to the ad multiple times prior to the event.

Ad Recency – Those exposed to campaigns on premiere day had a 24% higher likelihood of viewership, highlighting the importance of concentrating an advertising push closer to the premiere date. Ad recency is an important factor for any consumer decision-making that relies on top-of-mind-awareness, and this is especially the case for events occurring at a specific time. 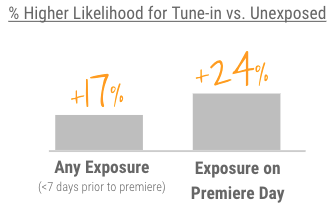 Ad Frequency – Audiences exposed to 5+ YouTube advertising exposures between 2-6 days prior to the premier had a 133% higher likelihood of viewership, highlighting the value of hitting audiences with the message multiple times in the lead-up to the premiere. The increase in tune-in behavior appears to get substantially greater with at least three exposures, underscoring the need for meeting or exceeding effective frequency goals. 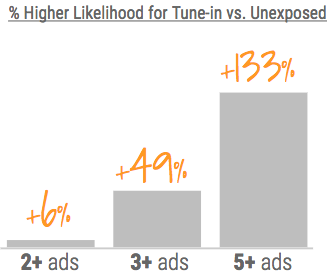 These recency and frequency findings make intuitive sense given what we know about advertising more generally, but also adhere to marketing principles specific to any ‘launch’ event. The ability to reach, inform, and engage consumers with video advertising while fostering urgency and anticipation of the event (i.e. the show premiere) can persuade incremental viewers to pick up the remote and tune in.

With the number of new original content shows continuing to expand, it can be difficult for an individual program to break through the clutter and get noticed. Shows that do manage to get a viewer to tune in for a premiere have a chance to convert them into loyal, long-term viewers. There’s a lot at stake in having a successful show premiere, and a smart digital video advertising plan can help marketers maximize their chance at success.