Ensuring that online ads are viewable has become a rallying cry for advertisers and publishers have been working hard to improve their inventory on this dimension. Website design and inventory placement are being tested and optimized to make sure their ads are likely to be in-view. Despite their best efforts, display ad viewability rates did not budge between 2013 and 2014, but remained stuck at 46 percent. The likely culprit for this stagnation? Improvements in inventory placement are being counteracted by an uptick in ad fraud, which generates impressions that are by definition not viewable. 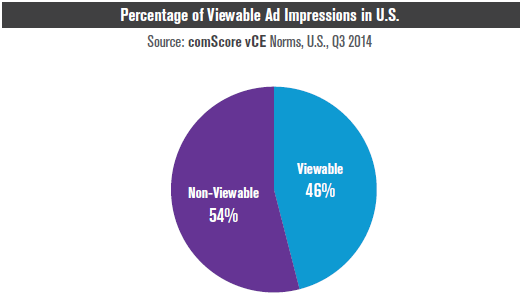 Ad fraud and non-human traffic (NHT) became a hot topic in 2014, as the industry realized that combatting these issues would reduce campaign waste and improve effectiveness. Recent Comscore research showed that among hundreds of digital ad campaigns measured in November, 21 percent of them had NHT levels of at least 5 percent, and those campaigns accounted for 75 percent of all NHT impressions. Not every campaign is affected in the same way, but it has the potential to threaten any campaign and can create a substantial amount of waste.

In order for measurement of ad effectiveness to be accurate and meaningful, advertisers need to be ensured that their ads are delivered in-view to actual consumers – not bots. Using solutions to determine a publisher’s lift contribution for key branding metrics – brand awareness, favorability, likelihood to recommend and purchase – on desktop and mobile ad campaigns can help identify which placements generate the strongest ROI. And, this can also help identify the ads that are not in-view due to factors like ad fraud.

The fact that viewability rates did not improve from 2013 to 2014 despite publishers’ efforts indicates that more still needs to be done to combat this issue. Download our new whitepaper – U.S. Digital Future in Focus 2015 – to learn more.