RESTON, VA, December 29, 2010 – Comscore (NASDAQ : SCOR), a leader in measuring the digital world, today reported holiday season retail e-commerce spending for the first 56 days of the November – December 2010 holiday season. For the holiday season-to-date, $30.81 billion has been spent online, marking a 13-percent increase versus the corresponding days last year. The most recent week (week ending Dec. 26) witnessed $2.45 billion in spending, an increase of 17 percent versus the corresponding week last year.

*Corresponding days based on corresponding shopping days
(November 2 thru December 27, 2009)

“Online holiday spending has remained strong through Christmas and we’ve already seen the season totals easily surpass the levels of the past few years to set a new record for spending at almost $31 billion,” said Comscore chairman Gian Fulgoni. “For at least this holiday season, the American consumer has been able to shrug off the continuing economic challenges of high unemployment rates and depressed housing prices and spend at a rate that has been slightly stronger than we had expected. After the past few years’ struggles, it is gratifying to see e-commerce return to a state that can only be described as a very merry holiday shopping season.”

Computer Hardware ranks as the top growing category for the holiday season to date with a 23-percent increase versus last year. Purchases of handheld devices (such as Apple iPads and e-readers) and laptop computers have driven much of the category growth. Books & Magazines ranks second with 22 percent growth, followed by Consumer Electronics (up 21 percent), Computer Software excluding PC Games (up 20 percent) and Toys (up 16 percent). Other categories in the top ten included Jewelry & Watches (up 11 percent) and Apparel & Accessories (up 8 percent).

*Corresponding days based on corresponding shopping days
(November 2 thru December 24, 2009) 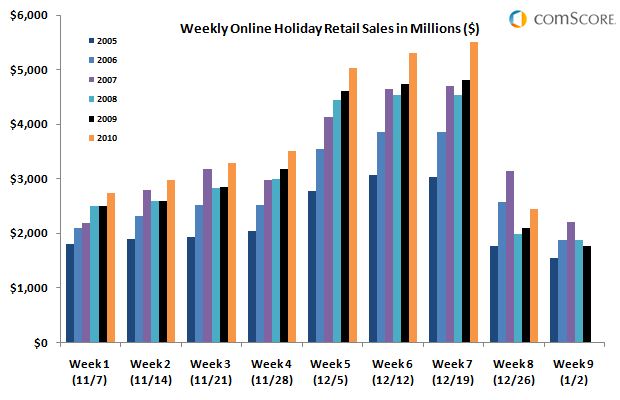