RESTON, VA, December 8, 2010 – Comscore (NASDAQ : SCOR), a leader in measuring the digital world, today reported holiday season retail e-commerce spending for the first 35 days of the November – December 2010 holiday season. For the holiday season-to-date, more than $17.5 billion has been spent online, marking a 12-percent increase versus the corresponding days last year. The most recent week saw four individual days eclipse $800 million in spending, led by Cyber Monday, which became the heaviest online spending day on record at $1.028 billion. Tuesday, November 30 reached $911 million, making it the third heaviest online spending day on record, with Wednesday ($868 million) and Thursday ($850 million) also reaching high levels, although growth rates for the season subsided in the latter half of the week and through the weekend.

*Corresponding days based on corresponding shopping days
(November 2 thru December 4, 2009)

“Cyber Monday started the week off with a bang, but online spending growth softened during the latter part of the week and into the weekend,” said Comscore chairman Gian Fulgoni. “We anticipated that the post-Cyber Monday period would experience a slight hangover after many of the retailers’ most aggressive deals and promotions expired, but we can expect to see activity begin to pick up again next week as we get into the middle part of December when online buying typically peaks.”

Free Shipping Surges to More than 50 Percent of Transactions

Over the years, one of the most prevalent promotions used by retailers during the holiday season to drive e-commerce purchasing has been free shipping. An analysis of the share of e-commerce transactions that included free shipping suggests that the promotion has accelerated in importance once again in 2010 with each of the most recent three weeks seeing more than 50 percent of all transactions include this incentive. The week ending Sunday, November 28 showed a peak free shipping rate of 55.1 percent, 9.6 percentage points higher than the corresponding week in 2009. The most recent week (ending December 5) also showed a significant increase versus last year, growing 7.6 percentage points to 51.4 percent.

*Weeks based on corresponding shopping days for 2009

“Without a doubt, free shipping has become a critical driver of e-commerce purchasing, with the majority of consumers indicating that they will abandon their shopping carts if they get to check-out and find that free shipping is not included,” added Mr. Fulgoni. “Retailers have increasingly responded to this consumer demand, with market leaders Amazon and Walmart, for example, both offering free shipping on virtually all transactions this season. Importantly for retailers, transactions with free shipping run an average of 30 percent higher in basket value than those without, hopefully helping to offset some of the margin compression that can occur with such attractive incentives.” 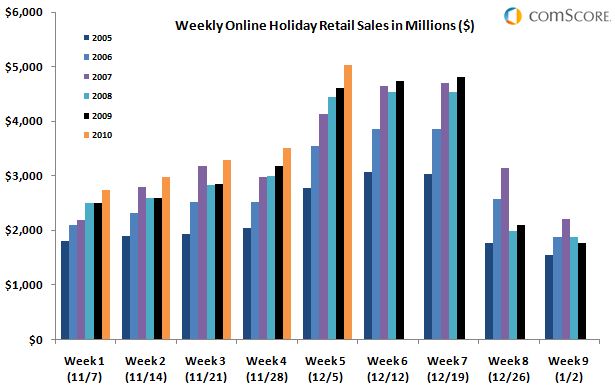