RESTON, VA, September 17, 2017 – Comscore has released ratings information on consumer viewing activity in all Texas markets – including the massively-impacted Houston and Beaumont TV markets prior to, during and following the landfall of Hurricane Harvey – and announced that it will also report TV ratings data for Hurricane Irma-impacted markets in Florida.

Comscore Local, which provides daily measurement of viewer behavior via direct observation of local viewing activity in millions of homes in all 210 markets, is able to provide the industry with reliable viewing information for all Harvey-impacted markets. Because of Comscore’s large measurement footprints in each market, viewing estimates could still be produced during the storm, despite the very real impact power outages and temporary home abandonment had on viewership as a result of the hurricane.

On Sunday, August 27, as Harvey approached the Texas coast and the flooding began to unfold, Comscore Local TV data showed that homes not affected by outages clearly saw much higher overall TV viewership compared to the corresponding day the previous week. This difference was most pronounced in the morning and early afternoon hours, but continued to be evident throughout the entire day. Comscore data shows that, during the storm, viewers were especially reliant on local broadcast stations to obtain critical information about the storm’s path, the flood’s expansion and how best to protect family and property. 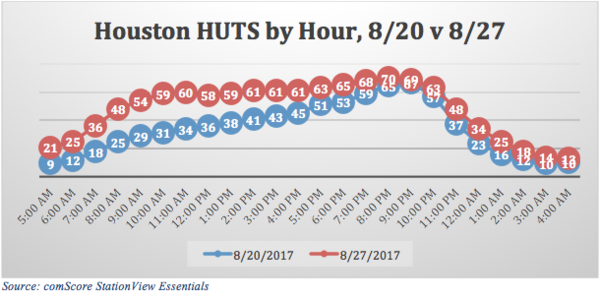 In Houston, the combined total-day average audience for the ABC, CBS, NBC and FOX affiliates was more than 537,000 households during Hurricane Harvey, a 140% increase vs. the prior week. The share of viewership to the four major affiliate stations increased by 62% vs. to prior week, as well.

In Beaumont during Hurricane Harvey, the major TV stations’ average audience was double that of the relevant cable channels across the entire broadcast day, and represented an 89% increase in viewership versus the prior week’s audiences.

"The Hurricane-related devastation in Texas and Florida reminds us all that Mother Nature can unleash terrible fury upon us and our neighbors from time to time, and local television stations have been, and clearly remain, a vital source of information for viewers across the country in times of severe trouble in local markets,” said Comscore’s Executive Vice President of Local Television, Steve Walsh. “We are pleased that Comscore Local TV measurement can withstand the impact of weather-related power outages and continue to reflect real viewing activity as it happens, providing local markets large and small with the viewing data they need to understand their audiences.”

About Comscore
Comscore is a leading cross-platform measurement company that measures audiences, brands and consumer behavior everywhere. Comscore completed its merger with Rentrak Corporation in January 2016, to create the new model for a dynamic, cross-platform world. Built on precision and innovation, Comscore’s data footprint combines proprietary digital, TV and movie intelligence with vast demographic details to quantify consumers’ multiscreen behavior at massive scale. This approach helps media companies monetize their complete audiences and allows marketers to reach these audiences more effectively. With more than 3,200 clients and a global footprint in more than 75 countries, Comscore is delivering the future of measurement. Shares of Comscore stock are currently traded on the OTC Market (OTC:SCOR). For more information on Comscore, please visit  comscore.com.

Cautionary Note Regarding Forward-Looking Statements
This press release contains forward-looking statements within the meaning of Section 27A of the Securities Act of 1933 and Section 21E of the Securities Exchange Act of 1934, including, without limitation, Comscore’s expectations as to the financial and operational effects of StationView Essentials and Comscore's entire suite of advertising products. These statements involve risks and uncertainties that could cause our actual results to differ materially, including, but not limited to, Comscore’s ability to project the financial impact of the partnership or Comscore’s ability to achieve its expected financial and operational results. For additional discussion of risk factors, please refer to Comscore’s respective Annual Reports on Form 10-K, Quarterly Reports on Form 10-Q, and other filings that Comscore makes from time to time with the Securities and Exchange Commission (the “SEC”), which are available on the SEC’s website ( www.sec.gov).

Investors are cautioned not to place undue reliance on our forward-looking statements, which speak only as of the date such statements are made. Comscore does not intend or undertake any obligation to publicly update any forward-looking statements to reflect events, circumstances or new information after the date of this press release, or to reflect the occurrence of unanticipated events.

dentsu and Comscore Partner to Transact on Advanced Audiences...