We are now a few weeks into the holiday shopping season, and I’m looking forward to following the trends during what will be my twelfth season covering this sector. Having been through it many times before, I’ve seen dozens of fascinating storylines emerge as consumers have shifted their online shopping habits and retailers have changed their marketing strategies to adapt to a digitally-driven environment.

Despite the many new and interesting storylines that emerge each season, I’ve found there is often too much of a focus on holiday storylines that are outdated, unfounded, or just plain miss the real story. And yet for some reason, these myths persist. Below are five common holiday shopping myths that I believe are in need of a reality check.

Myth #1: Half of Holiday Spending Will Happen Online
Every year before the holidays we see the results of an online survey suggesting that somewhere around 40-50% of holiday spending will be done online. Often these results get reported as if they are a good approximation of what to expect for the holidays. However, the percentage of holiday spending that actually occurs online is nowhere near that level. The Department of Commerce pegged Q4 2015 e-commerce as 8.7% of total retail, and Comscore’s calculation – which excludes the Department of Commerce categories of Food & Beverage, Gas and Auto Sales for a more apples-to-apples comparison of discretionary retail spending – pegged the number at 15% last year. In each case, the numbers are far lower than online survey estimates. 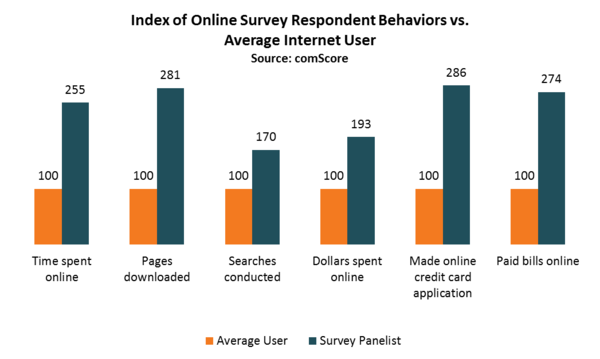 Another issue with survey data is that respondents tend to overestimate quantities, such as how much money or time they’ve spent on something. This likely contributes to some additional overstatement when you ask consumers how much they intend to spend online during the holidays.

When accounting for both factors, it’s not hard to see how an e-commerce percentage that will actually be in the mid-teens can result in a survey estimate approaching 50%. It’s a number that makes for a great headline leading into the season, but it doesn’t reflect reality.

Myth #2: Weak Black Friday In-Store Sales Means the Season Will be a Disaster
The past two seasons have seen varying levels of hysteria and doomsdayism following unexpectedly weak Thanksgiving weekend spending at brick-and-mortar. In both cases, growth expectations and consumer sentiment heading into the season were reasonably positive, so when the holiday weekend recorded unexpected sales declines, the fear was that the season was unexpectedly headed for a disaster. In both cases, this turned out not to be true as the seasons experienced healthy overall year-over-year growth rates, including double-digit increases for online spending.

Why, then, the early season troubles and subsequent misreading of its implications? Because the analysis assumed Thanksgiving weekend sales would be a bellwether for the full season, which has traditionally been the case. But the past few years have seen an idiosyncratic development emerge that threw off the early season spending patterns, rendering it an ineffective bellwether for the rest of the season. That idiosyncratic development? Thanksgiving Day store openings.

What’s been happening is that a limited percentage of stores now open for a few hours in the evening of Thanksgiving Day, drawing out the most avid Black Friday shoppers, many of whom then sit out Black Friday. The net effect is that, with a limited shopping window for a limited set of stores on Thanksgiving, $100 of spending gets pulled forward by a day, but maybe at the expense of $200 getting spent on Black Friday. As a result, overall spending for the period has seen declines, not because of an inherent lack of demand, but because of the unique dynamics of how and when people actually get out to the stores in those first few days of the season.

I’ve described this phenomenon as a Prisoner’s Dilemma for retailers, which I’ve modeled below. This game theory concept says that the payoff for retailers would be better if everyone just stayed closed on Thanksgiving, but given the option to open on Thanksgiving each retailer’s dominant strategy becomes to open early. The net result of that decision is a lower payoff than if they had all just stayed closed to begin with.

It’s a fascinating dynamic to be sure, but important to realize that it is a one-time “game” that – while it distorts the short-term payoff for retailers – does not accurately reflect or predict consumer demand for the remainder of the season.

Myth #3: The Cyber Monday Phenomenon Occurs Because People Have Faster Internet Connections at Work
Ok, this myth is a bit dated but for some reason persists every year. When Cyber Monday was first coined in the mid-2000’s it was theorized that the spike in online buying that occurred on the Monday after Thanksgiving was because internet connection speeds were faster at work than at home. History has proven that if this was ever a driver of buying at work, it was only marginally the case – and certainly hasn’t been the case for a number of years with high-speed internet connections available almost universally at this point.

What was really going on? The first factor is simply opportunity, with many workers spending large portions of their days in front of computer screens with internet access. It has become commonplace for people to take care of some personal tasks on their computers throughout the work day, and during the holiday season that means doing a little holiday shopping. With their shopping kicking into high gear during Thanksgiving weekend, it bleeds right into that Monday following the holiday. Many workers also want to shop for their family members without anyone looking over their shoulder, and doing so from their work computer affords them that privacy.

And while we’re on the topic of Cyber Monday, for years we had to fight another myth – the common misconception that it was the heaviest online spending day of the year. In fact, it originally got the moniker because of the big jump in activity that happened that day – not because it was #1. You can see that in 2005-2007, the highest Cyber Monday ranked for the season was #8, while Green Monday (the 2nd Monday in December) tended to be the top day of the year. 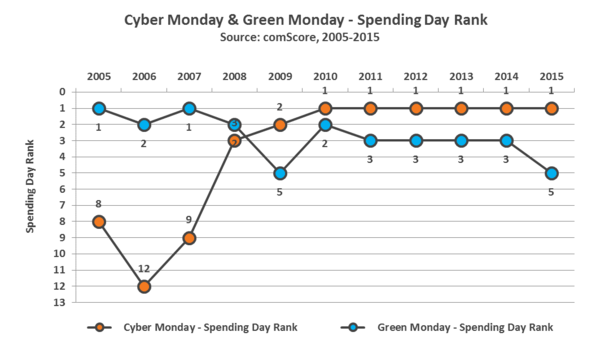 Interestingly through, as Cyber Monday day gained broader awareness as a promotion and as consumers became more responsive to deals and discounts (particularly amidst the worst of the financial crisis), it became a self-fulfilling prophecy and ever since 2010 Cyber Monday has in fact been the #1 online spend day.

Myth #4: Holiday Spending is Getting Pulled Forward Because of Earlier and Earlier Promotions
Talk of earlier and earlier promotions gets peddled earlier and earlier every year, and for the most part it doesn’t correspond to how consumers actually behave. While it’s true that there are always some anecdotal examples of holiday decorations going up in early October, this narrative incorrectly assumes that shoppers necessarily use these signals to ramp up their holiday shopping. On the contrary, most shoppers are accustomed to shopping in earnest after Thanksgiving, when the deals and promotions are both ubiquitous and compelling enough to substantially change their behavior in a way that spurs buying.

Here’s what we’ve seen in our data over the past few years. There has been almost no distinguishable difference in the portion of annual spending that occurs before and after November. Holiday spending as a percentage of total year desktop e-commerce spending has been remarkably consistent around 22% with no obvious pattern of trending in one direction or the other – and much of those differences can likely be explained by variations in how shopping days fall from one year to the next. If there were actually a material pull-forward effect, we would expect to see these numbers see a steady decline over time along with greater variation in that overall percentage. 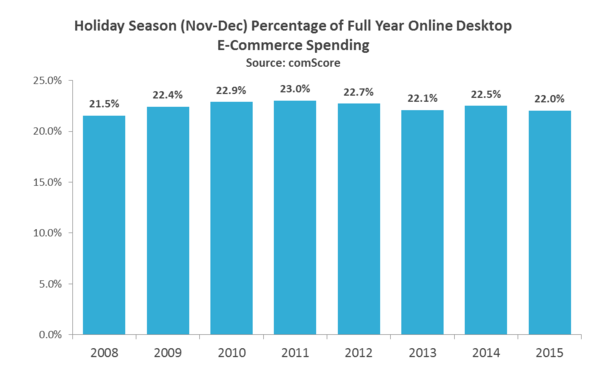 There is also a question of whether spending is getting pulled forward during the pre-Thanksgiving weeks of November, and recent evidence suggests that is also not the case. Going back the past three holiday seasons, I plotted out the cumulative share of retail spending by week for the nine comparable-day shopping weeks that cover the bulk of the season. (For this analysis, using comparable shopping days is preferable to calendar dates.) The consistency in share of cumulative spend by week showed remarkable consistency across all three years, particularly by Week 4, which is the week before Thanksgiving. If spending were being pulled forward every year, we’d expect to see that percentage by week 4 increasing in each subsequent year and that has not been the case. 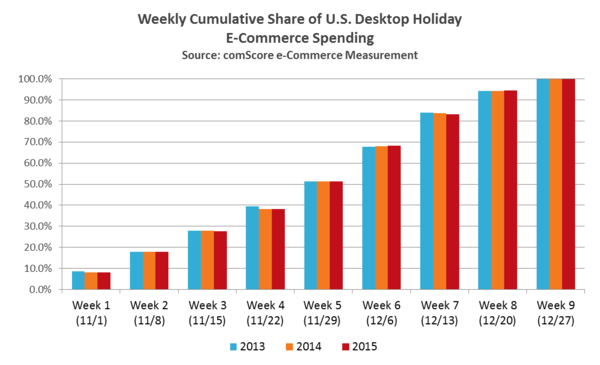 So remember that while we may see anecdotal evidence of early holiday promotions, that doesn’t mean that consumers are materially shifting consumer behavior. Evidence suggests their spending patterns are largely consistent from year to year, despite any differences in promotional patterns.

Myth #5: Major Holiday Snowstorms Provide a Significant Boost to E-Commerce
This myth usually pops up at least once during the holiday season, and oftentimes in January or February when snowstorms may be the heaviest. The logic goes: if a big snowstorm hits and people are confined to their houses and can’t hit the stores, they’ll turn to their computers and phones for shopping instead. Now, let me be clear, there’s a logic to this and it probably does happen on some level. The myth isn’t really that snowstorms can’t affect shopping patterns, it’s the magnitude of the effect and the implication that it will materially affect aggregate spending.

When we’ve examined the impact of major weather events on online spending patterns in specific local markets, we’ve never seen more than a minor impact and it is one that washes out when averaging in the affected market with the rest of the U.S. And it washes out even further when taken in the context of a full holiday shopping season, since even bad snowstorms tend to leave shoppers homebound for only a day or two. The other mitigating factor is that bad snowstorms often leave people without power, which significantly hampers their ability to shop online. So the net effect of a snowstorm tends to be an indistinguishable impact on e-commerce spending patterns on an aggregate basis.

Holiday Headlines Need a Critical Eye in 2016!
When we see these narratives once again this year, let’s agree that we will not simply take them at face value. Misleading headlines that happen around Thanksgiving weekend can be the most pernicious because they’ve had a tendency to project doom and gloom for the season when actual spending behavior was far healthier than the public was led to believe.

We have every reason to believe that 2016 will be one of the strongest – if not the strongest – holiday season in terms of year-over-year e-commerce growth since the financial crisis. All relevant indicators are pointing in a positive direction. Gas prices remain low, unemployment is low, wage growth is up, and spending growth rates this year have been especially robust.

If we see some early headlines that read like the sky is falling, or that consumers are suddenly channel-shifting by orders of magnitude more than previous years, let’s hold off on hitting the panic button. Sit back, take another sip of egg nog, and enjoy yourself – after all, it’s the most wonderful time of year!

Planes, Trains, and Automobiles: Are Consumers Traveling Again for...