Tis the season for holiday shopping, and across the globe more people are turning to the Internet to make their purchases – particularly in the retail sector. E-commerce is traditionally led by travel transactions and purchases, but towards the end of the year in the U.S., retail e-commerce picks up. E-commerce can equal big bucks – take for instance the recent record the U.S. hit in holiday spending when the country experienced its first day on record of achieving more than $1 billion (USD) in e-commerce sales on a single day during Cyber Monday (November 29). This highlights the opportunity the digital channel holds for retailers. 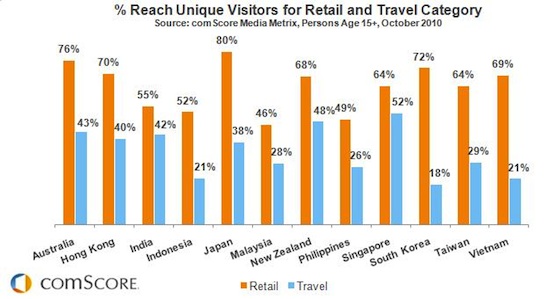 In Asia Pacific, visitation to retail sites has achieved a much higher market penetration than travel – which tends to be the gateway and primary category in online purchasing. In most markets, more than half of Internet users frequented a retail destination in October, while in most cases less than half frequented a travel site. Looking at which markets were most retail savvy, Japan topped the list with 80 percent of its online population visiting a retail site in October, followed by Australia (76 percent) and South Korea (72 percent). Singapore achieved the highest percent penetration for travel with 52 percent reach, followed by New Zealand and Australia at 48 percent and 43 percent; these markets have retail penetration rates of 64 percent and up. It’s interesting to note that just because a market exhibits high propensity for utilising retail sites, does not necessarily mean they are as willingly to frequent travel sites, with large differences in these two activities seen in several markets including Japan, South Korea, Vietnam, and Taiwan.

When consumers turn to the digital channel to purchase retail goods or travel, global and local brands are often pitted against each other to fight for the attention and dollars of visitors. A look at the top destinations on a regional basis paints a mixed picture with Asian-based companies and multi-nationals finding nearly equal popularity with consumers. Alibaba.com Corporation was the clear retail leader with nearly 120 million visitors from the Asia Pacific region; its flagship taobao.com retail site accounted for 108 million visitors in the region. Alibaba.com is also ranked as the second largest global online retailer after Amazon. U.S.-based Amazon and Apple followed as number two and number three, while local players such as Rakuten.co.jp, Paipai.com, and Zol.com.cn all secured places in the top 10 listing. 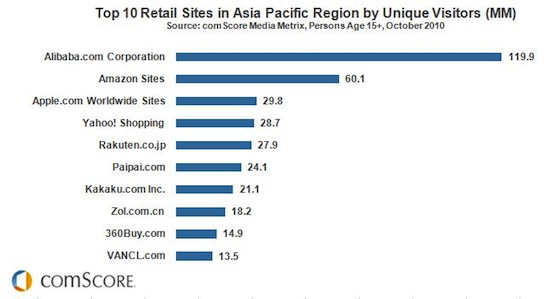 In most markets across the region, women were more likely to consume content at retail sites than men, with Taiwan, Hong Kong, Singapore, and Japan showing strong disparity in page consumption. On the flip side, Vietnam and the Philippines showed males much more likely to consume pages of retail content than females. For brands looking to develop engaging content on their sites, understanding viewers from a demographic and behavioural standpoint is critically important.

The Future of E-Commerce: A Promising Outlook

At this point, e-commerce revenues in Asia Pacific are still not comparable to the Black Fridays and Cyber Mondays, but increasing traffic to retail sites means more shopping, which will result in more buying – online or offline. The e-commerce channel holds incredible potential for brands and retailers across the region and for some markets in particular. For brands attempting to access and capitalise on the online channel as a way to reach consumers and their wallets, it’s important to remember several things when building your digital commerce strategy:

E-commerce in Asia Pacific is growing as our company also highlighted in a recent press release that the U.S.-focused Cyber Monday also attracted a lot of international shoppers. Nearly 6 percent of the billion dollar hoard on that day came from people living outside of the U.S., but shopping at U.S. websites. This is a consistent 6 percent trend that also occurred last year in 2009 – but last year’s 6 percent was out of $887 million whereas this year’s 6 percent was out of $1.028 billion…and I, for one, did my part and bought online from U.S. retailers on Cyber Monday.

This post was originally published at ClickZ.asia on December 21, 2010.

What the Recovery Looks Like in Hotels and Vacation Rentals