Each year for the past few years, leading online retailers Amazon and Walmart have competed for e-commerce supremacy during the holiday season. Though Amazon remains the undisputed leader in the space, Walmart has improved its position in the market through aggressive holiday promotions and pricing strategies. In 2009, Walmart announced significant online discounts for books, a move that was interpreted by many as ratcheting up the competition with Amazon. Amazon responded to the strategy with price cuts of its own on books. This year, Walmart announced to a great deal of fanfare that it would be offering free shipping on more than 60,000 products with no minimum purchase price. Once again, Amazon responded in kind.

So why all the recent fuss over free shipping? As it turns out, it’s a pretty important driver of e-commerce activity, a trend that has been growing over the past several years. Free shipping really began to emerge as an important incentive around Cyber Monday promotions, but it has increasingly become an everyday promotion in the online retail environment.

Comscore data highlights the emerging importance of this trend. In Q3 2010, 41% of all online retail transactions included free shipping, up 6 percentage points from two years prior. During a recent survey, we asked consumers how important free shipping was to them when making a purchase and 55% of respondents indicated that they would be at least somewhat likely to abandon their shopping cart without that promotion. 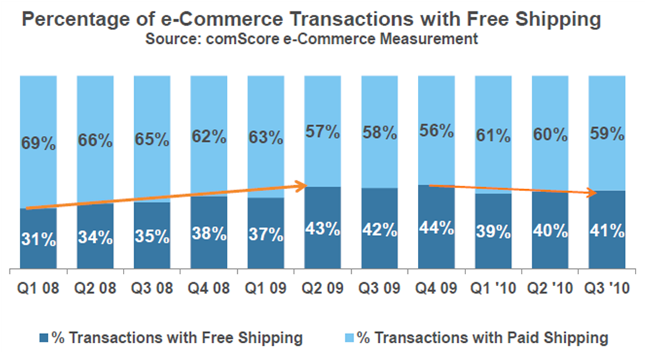 While there’s a tendency to think that having to offer free shipping is a margin-eater for retailers, it can actually be to the retailer’s benefit if utilized effectively. For example, during the third quarter, the average order value for transactions involving free shipping was 41% higher than transactions without free shipping.

There’s no reason to think the free shipping trend will be going away anytime soon. With free shipping becoming more prevalent every year, consumers have become conditioned to expect it when shopping online. In a recent Comscore survey, 84% of consumers indicated that free shipping was somewhat or very important when making a purchase this holiday season. Interestingly, 31% of consumers said they decide what gift to purchase based on the availability of discounts or coupons. In other words, the existence of a coupon actually determines where an online purchase will be made. Another 42% of consumers concurrently browse coupons while comparing potential purchases to help them reach a buying decision. 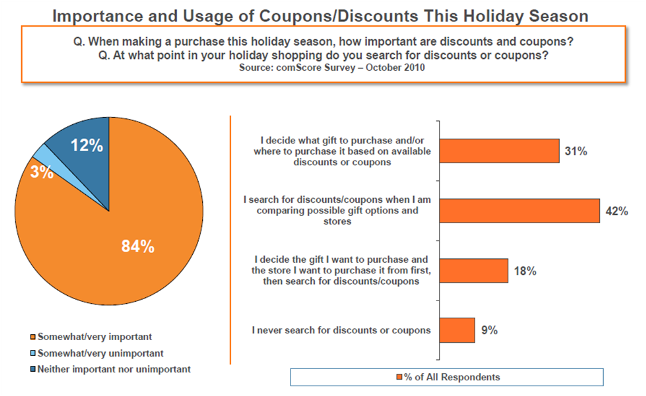 So retailers should be aware of the importance of free shipping, because it could make or break their holiday season. Consumers have come to expect it and in many cases require it to purchase online, so retailers would be wise to accept this reality and figure out creative ways to maximize average order values and loyalty. Ultimately these factors, more than simply offering attractive discounts and free shipping, will help determine which retailers walk away winners this season.