Earlier this week Comscore released our 2015 U.S. Mobile App Report, which is full of interesting new findings on the importance of apps to the digital landscape and how consumers are engaging with them. If there was one single finding that has the most far-reaching implications, it’s that in the past year multi-platform digital audiences for the Top 1000 media properties have grown 22%. That is a staggering number when you consider that the overall digital media population is near saturation and grew 2%, more or less in line with population growth. 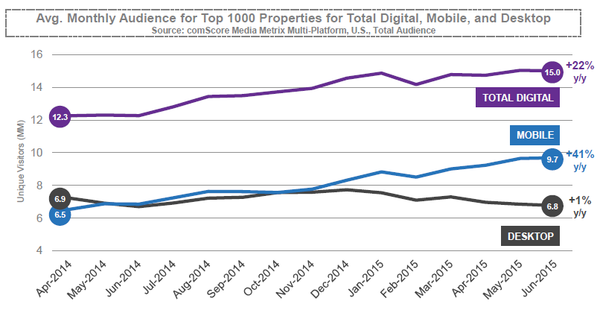 What is driving this huge increase in audiences for digital publishers? Well, it’s almost completely due to the growth of mobile media, and even more specifically the importance of the mobile web. In perhaps one of the most surprising findings from the report, mobile web audiences are actually almost 3x bigger than mobile app audiences and they are growing 2x as fast! 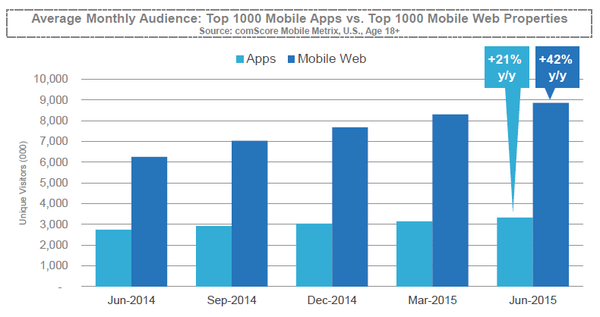 So digital publishers can’t look at apps vs mobile web as an either/or proposition. In fact, both forms of content delivery are vitally important and they tend to pull on different levers that can help monetization: audience scale (i.e. reach) and audience engagement (i.e. frequency). Rather than looking at them as competing for resources, it’s important to figure out how they can be complementary to one another.

Mobile web visits, for example, often come by way of social media platforms like Facebook and Twitter. This can bring in traffic from people who might not otherwise engage with a particular media brand. What publishers must figure out is how to convert a meaningful percentage of this drive-by traffic into loyal, engaged users of the app. And for those who are app users, they might be more likely to follow those media brands on social channels, making them more likely to not only click-through on that content when it appears via social but also share it more widely within their network. So mobile app and mobile web can be very symbiotic for publishers who think about them as complementary assets.

And all of this can help increase the opportunity for ad exposure, which leads me to the next promising storyline for digital publishers: mobile ads not only work, but they work very well. In fact, on a variety of brand effectiveness measures, mobile ads outperform desktop ads by a factor of 2-3x. This is likely because mobile ads can take-over the majority of the screen when they appear and they often reach consumers on-the-go and closer to the point of purchase. As a result, they seem to work particularly well at the bottom of the funnel, driving metrics like purchase intent. 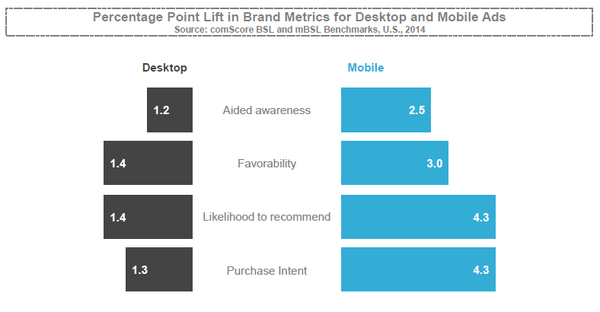 Now, for most publishers today mobile ads still tend to lag desktop ads in terms of CPMs. But with an expanding body of proof that these ads are delivering on key brand metrics, demand for mobile ads should rise and put upward pressure on CPMs.

That means digital publishers not only have audiences that are going up and to the right because of mobile, but their monetization rates also appear pointed in that direction. So while the shift to mobile has been a disruptive event in the content world, there is strong reason for optimism. But publishers can’t just expect to ride the tailwind to success; instead, they must focus on: (1) how they get their mobile web and mobile app assets working in harmony, (2) developing multi-platform ad packages that efficiently deliver the right audiences for advertisers, and (3) proving that their mobile ads work. Those who nail down each of those strategies will have the most to gain in the transition to mobile.