A few years ago I read the Charles Duhigg’s excellent book The Power of Habit: Why We Do What We Do in Life and Business. In it he discusses the notion of a “habit loop” governing many of our day-to-day behaviors, which consists of three elements: a cue, a routine, and a reward. The cue is something that serves as a sensory trigger to begin the behavior loop, the routine is the resulting behavior, and the reward provides the signal to our brains that this behavior is enjoyable and to commit it to memory so that it will be repeated.

This concept resonates when you apply it to what has fast become one of our most habitual behaviors – checking out what’s on our smartphones. And even more specifically, how we engage with the apps on our phones. Every time we take our phones out of our pockets, we’re greeted with a home screen filled with a variety of colorful windows to our favorite online behaviors. If these apps are our cue, then the routine is choosing an app to open, and the reward is whatever stimulating activity awaits us behind that window, whether it’s a communication from a friend, a video to watch, music to listen to, or an interesting article to read.

The Power of the Home Screen
While we often leaf through our screens to find the right app for a specific use case, most of time we open our phones merely to relieve a brief moment of boredom. And that means to use an app that is probably staring us in the face on the home screen. It is low friction and doesn’t require much thinking; you see an app that you know delivers the stimulation you want in the moment and you open it up.

Most smartphone users – 75% to be exact – are aware of this tendency and actively curate their apps, putting their favorite ones on their home screen. 59% of these home screen curators say that their expectation of using that app frequently drives the decision for what gets promoted, while 56% say they want easier access, and 40% say it’s an app that they might need to access quickly. 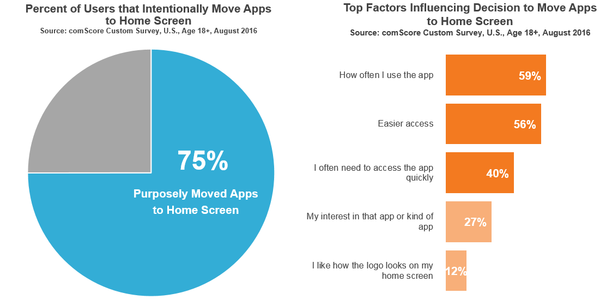 Many take it a step further and actively position their most favorite apps within striking distance of their thumbs, so they don’t have to work too hard to open that app they know they’re likely to be reaching for a dozen times a day. 61% of Millennials and 59% of 35-54 year-olds who use their phone one-handed at times indicate that they consciously factor in thumb-reach. 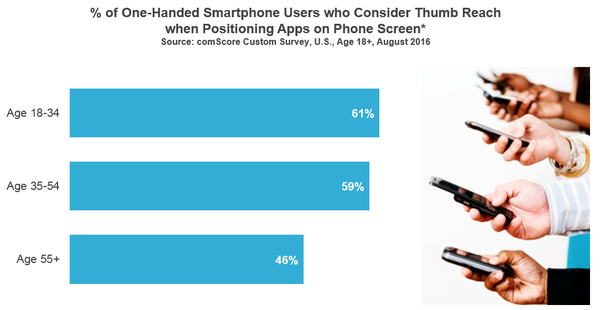 * Represents the percentage of one-handed smartphone users who responded on a 5-point scale that they “Strongly Agree” or “Somewhat Agree” with the following statement: “Agree/Disagree: The ease with which I’m able to reach an app with my thumb when operating my phone affects where I have positioned that app on my smartphone?”

Users are making these very deliberate, conscious decisions that end up having a huge impact on their unconscious day-to-day behaviors. So, knowing that so many users actively curate their home screen and app position, what does that mean for how users end up engaging with apps?

The Habit Loop Favors the Biggest Players
Given these habits, it’s not surprising that the apps with the highest chance of being on users’ home screen have a high correlation with usage incidence. That’s not to say that one necessarily causes the other; it’s probably more of a self-reinforcing cycle that begins with users placing apps on their home screen that they expect to use the most frequently – but by virtue of those apps being the most visible to them every time they open their smartphone, they are also likely to be used more often than they would if the user had to hunt down the app each time.

Facebook is the most prominent example. It has a huge lead in its likelihood of being on a user’s home screen at 46% (Google Maps is a distance 2nd at 29%), and also rates far above any other app in usage incidence at 79%. 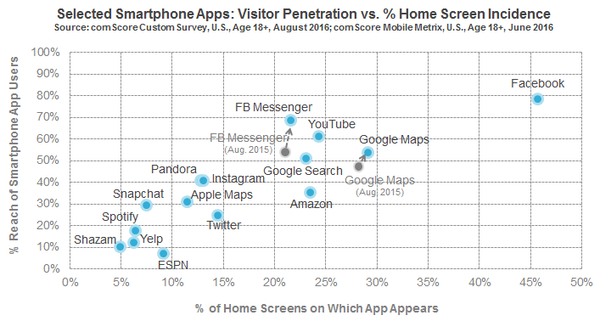 In the second part of this blog post, we’ll examine more deeply the implications of these dynamics that tend to favor the most widely used apps. In the meantime, if you’d like to download a complimentary copy of The 2016 U.S. Mobile App Report, you can get it here.