In the first part of this blog post, we discussed the power of habit in driving smartphone app usage and how the biggest names in digital media generally have an advantage as more media consumption shifts to digital. One of the ways we see this advantage manifest is the prevalence of power law distributions in examining usage patterns. A power law distribution can be used to describe any exponential mathematical relationship, but one of the more commonly referred to power laws is y=1/x, which is represented as an asymptotic relationship between the X and Y axes. 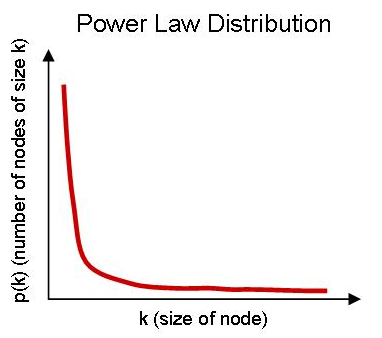 Power Law Distributions in the App Ecosystem
We see evidence of this power law distribution in a number of places in the app ecosystem, and we’ll examine why this might be the case and what individual apps can do to succeed. One power law example is when we plot the amount of time users spend within their top ranked apps. Across both smartphones and tablets we see that roughly half of all time is spent in the #1 most used app, followed by another 3-4 apps accounting for an additional 40% of time, and the long tail outside the Top 5 combining to account for just 10-15% of time spent. 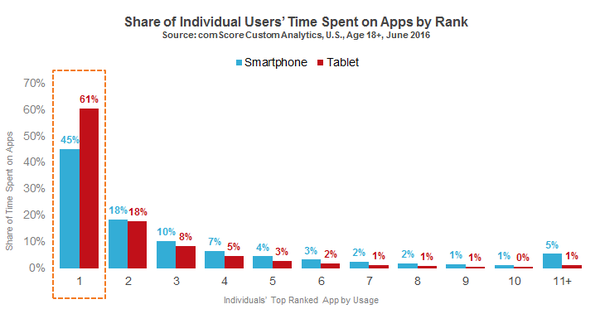 This highlights a few important points about smartphone usage. First, it suggests that many users have a default app that is likely to be their first (and probably unconscious) choice if they don’t have a specific prompt to use a specific app. If I need to find out where I’m going, I check Google Maps; if I want to book a restaurant reservation, I go to OpenTable. But, if I just take out my phone because I’m bored, I’ve got my default app. For many that’s probably Facebook, but for many others it might be some of the other big social networks or favorite news sites.

Power Laws by Content Category
We also observe these power law dynamics at the content category level. Across a number of categories we analyzed, we found that the most used app in the category accounted for an overwhelming percentage of time spent, followed by maybe two or three other players that carved out a meaningful percentage, followed by a very long tail. In social networking, Facebook drove the lion’s share, followed by Snapchat and Twitter. In Multimedia, YouTube was the strong leader, with Netflix and Hulu the only others of consequence. In retail, Amazon was the big kahuna, and among Newspapers The New York Times captured almost half of all app time. 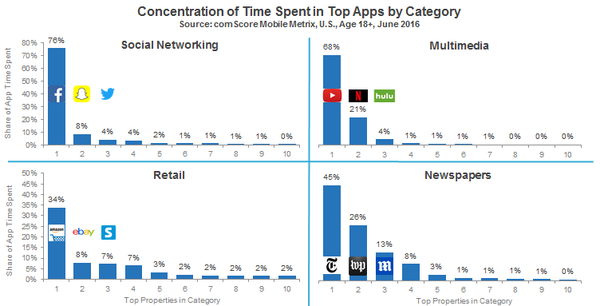 Why do we observe these same power law dynamics at the category level? It really comes down to scarcity of app real estate and the fact that most users don’t download more than a few apps in a specific category. The undisputed category leaders will almost universally make the cut, giving them a huge advantage that results in their disproportionately high usage in relation to the rest of the category. The two or three other big players in the category get onto enough people’s phones that they, too, carve out some market share. But it very quickly gets to the long tail, where the remaining players in the category are basically fighting for scraps of time and attention.

Power Laws & The Power of Habit
If you’re an app that makes its money primarily through advertising and is not one of the top handful of apps in its category, this power law dynamic can seem pretty daunting. Any individual app, by virtue of competing for scarce real estate in a very crowded market, has a huge challenge breaking through and this is why we see categories become “winner-take-most” markets.

So what’s an app to do in this environment? Consistent with the lessons of Duhigg’s The Power of Habit, an app must find its way into its audience’s habit loop.

The first thing an app should focus on is breaking through the considerable clutter to get downloaded in the first place. It’s not the easiest problem to solve, but it is doable with a smart strategy in place. That may mean paying for distribution through app install ads if your brand is not well known, or it may mean making more effective use of your marketing channels for existing customers.

If that strategy is successful, the app is now on the phone and the user theoretically has his visual cue, but most app marketing strategies fail to move beyond this initial step. As a result, they don’t get used and eventually get deleted.

By focusing more on establishing a routine that is reinforced by the right reward, app providers have the opportunity to significantly grow engagement. The best way to establish a routine with your app is to get promoted to the home screen. Easier said than done, right? That’s true, but how many apps have ever devoted a marketing strategy to getting home screen placement? You could do a marketing appeal asking users to put your app on their home screen, while of course highlighting a benefit to them of doing so (“stay on top of the latest news”, “get alerts when your favorite writer has published a new article”, etc.).

But probably the most important and most underutilized lever is establishing the right reward. The reward is the value that the user gets each time they open the app, and they will adjust their behavior depending on what that value is. If I go to a news publisher’s app and the first screen I encounter features 6 stories and on average 1-2 of those stories is worth clicking on, then that may give me only a modest incentive to check back regularly. If, on the other hand, 3-4 of those stories are consistently interesting to me, then that means the app has a high signal-to-noise ratio and is delivering sufficient value to incentivize me to check it frequently.

How can signal-to-noise ratio be improved for an individual user? By surfacing the most interesting content to them. That can be achieved by serving up the most read, most commented on, or most shared content. Or it can be done using algorithms to predict what the user might be interested in. Better yet, the user can be given tools to customize what they’re most interested in, whether that’s selecting their favorite writers, favorite topics, or favorite content channels. The best tactics might vary from one app to the next, but they all represent ways to provide a more rewarding experience each time to user opens the app.

The app environment is not easy to succeed in, and its inherent power law dynamics necessitate that apps figure out how best to harness the power of habit to increase usage and monetization. If you’d like to download a complimentary copy of The 2016 U.S. Mobile App Report, you can get it here.