Another major digital media milestone was reached this July. Smartphone apps, which have been playing an increasingly important role in consumers’ digital lives over the past several years, now account for more than half of all Americans’ time spent online, according to Comscore Media Metrix® Multi-Platform and Comscore Mobile Metrix®. While the smartphone app has been the most important access vehicle to the internet for some time, growing its share to a point where it now eclipses all other digital media platforms combined speaks to just how central to our lives the smartphone has become. 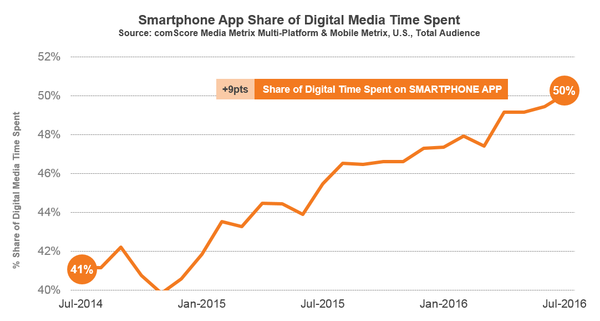 The high usage of smartphone apps compared to other media touchpoints shouldn’t come as much of a shock when you think about your daily online behavior. Chances are when you want to know what’s happening around the world, or in pop culture, or in your friends’ lives, your first move is to reach into your pocket and open one of the number of different social apps on your phone. And unless you already happen to be sitting at a computer, a smartphone app is probably your first option when you decide to listen to music, get directions to a destination, check the weather or catch up on email. The convenience factor is simply too powerful. You almost always have your smartphone on you, and apps allow you to immediately access a service in one simple tap of the screen. As smartphone screens have gotten larger and as 4G LTE networks enable faster speeds, there becomes even less of a reason to use other platforms such as desktop or tablets, save for specific tasks. 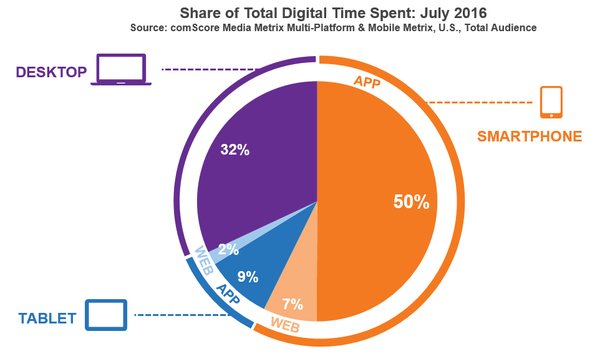 In the near term smartphone apps are likely to grow their share of digital beyond the 50% mark, but desktop and tablets will maintain critical roles in consumers’ online consumption for the foreseeable future. It’s important, however, that publishers and advertisers understand the outsized influence that smartphone apps have and will continue to have, and that they plan their digital strategies with this information in mind.

For more insights on the digital media landscape and a deeper dive into mobile app behavior, check out The 2016 U.S. Mobile App Report today.