In March the U.S. smartphone market reached 77 percent penetration, demonstrating just how prevalent these devices have become in Americans’ daily lives. Despite such a high incidence of smartphone ownership, penetration continues to grow at a healthy clip across all demographic segments, with certain demographics such as teens and older age groups gaining more quickly than others. While total U.S. smartphone penetration is up 8 percentage points in the past year, three age groups increased their penetration by at least double digits – Teens Age 13-17 (up 10.0 points), 45-54 year olds (up 10.7 points), and those Age 65+ (up 11.6 points).

Millennials continue to be the pace-setters for smartphone adoption, with 18-24 year olds and 25-34 year olds both hovering around 90 percent adoption. While teens have historically had slower adoption rates than their slightly older counterparts, they have been making up ground quickly and are now at 85 percent. In general, the older the age demographic the more likely to be a laggard in smartphone adoption, with those age 65+ currently the only demographic group still below 50 percent.

The increased adoption among teens is particularly interesting and worth some additional exploration. Knowing that teens are often not the primary purchasers of their phones, we wanted to understand more about which phones they were acquiring and which factors influenced the purchase decision. There was similar growth in adoption whether the teen or their parents/relatives were responsible for purchase. But interestingly, most of the growth in teen smartphone segment occurred at the high end of the market with a y/y growth rate of 116 percent among smartphones costing at least $250 and a minor decline among those costing less than $250.

Of course the most prominent OEM at the upper end of the market is Apple. So what’s happening with iPhone adoption among Teens? The chart below shows how overall iPhone adoption is ramping, along with the breakdown by specific device models. 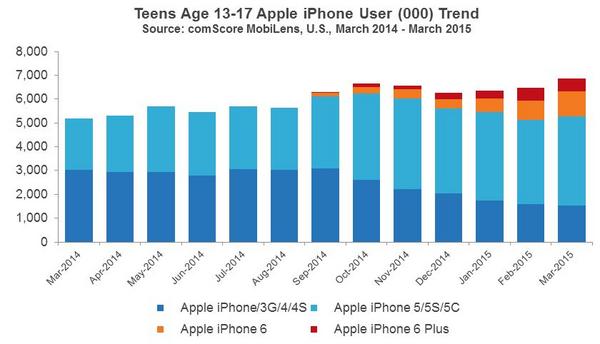 We can see that there are declines among teens in ownership of the earlier iPhone models, but gains across each of the other device segments, including the iPhone 5 and 5S. And of course there is a strong ramp among the iPhone 6 and 6 Plus. So it would appear that there is a mix of new iPhone owners and upgraders in the teen segment, with some teens upgrading to the 5 models and some upgrading to the 6 models.

What does adoption of iPhones among teens ultimately tell us about the state of the U.S. smartphone market? Likely that smartphones are no longer seen as a luxury but rather as mainstream and part of our everyday lives.

When I was growing up in the 1980s, cable TV was still seen as something of a luxury and I remember that several of my childhood friends not having it in their households. By the time the 1990s rolled around, almost everyone I knew had cable. It wasn’t that cable had gotten any more affordable, it was just that what was happening on cable TV had grown as a part of our culture. At some point those who could afford cable TV and didn’t have it probably began to feel like they weren’t keeping up with the times.

I suspect that is where we’re at with smartphones today. The public has begun to capitulate and recognize that smartphones are part of the fabric of our culture, and for many parents that means finally answering yes to the question “Can I please have a smartphone?”