The Digital Battleground: Obama vs. Romney

The Digital Battleground: Obama vs. Romney

Advertising matters in politics. As much as we’d all like to believe that we vote based solely on our principles and a careful weighing of candidates’ policy positions, media and marketing messages cast enormous influence on the defining narratives of an election and can ultimately tip an election one way or the other.

The 2008 election helped usher in the era of digital marketing in presidential elections, with online advertising, online fundraising and social media all helping to redefine the political landscape. As The Digital Politico: 5 Ways Digital Media is Shaping the 2012 Presidential Election demonstrates, the use of these vehicles has become even more important and looms even larger in influencing this year’s campaign.

Search Activity as a Proxy for Candidate Interest?
Search volume can be a good starting point for gauging the public’s appetite for information on a new contending candidate -- in this case, Romney. This is because the number of searches for a sitting President will heavily reflect the news of the day in addition to election-based interest.

Using Comscore Search Planner, we can compare the number of searches for “Obama” in April 2008 to “Romney” searches in April 2012 to see the Obama searches outdistance Romney searches by almost a factor of 5x (5.14 million vs. 1.16 million). However, we might also note that in April 2008 Obama was still locked in a fierce primary battle with Senator Hillary Clinton and he was very much a newcomer on the scene, whereas Romney had his own 2008 run for President and the public may have more familiarity with him already. Interestingly, Obama searchers in 2008 skewed under age 35, while Romney searchers tend to skew age 45+.

Paid Search Marketing Can Attract Swing Voters
Paid search offers an excellent way to deliver targeted messages to potential voters and donors. People who search on a candidate’s name just may be a swing voter actively pursuing information on their November ballot choices.

Both the Obama and Romney campaigns are investing in paid search, but the Obama camp maintains a healthy lead in both historical volume and current impression levels. The chart below from Comscore Ad Metrix shows that BarackObama.com is delivering 3x the number of paid search ads as MittRomney.com (7.5 million vs. 2.4 million). The Romney campaign has gradually been stepping up its investment since late last year, but Obama’s consistent past investment combined with the clear increase in 2012 investment demonstrates a strong belief in the power and influence of paid search marketing as an campaign tool. 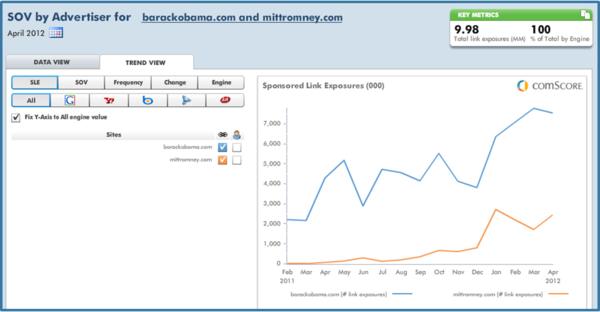 Display Advertising Reaching High Volumes in 2012 Election
Display advertising has also emerged as an important media vehicle in the digital battleground. Well-crafted ad copy combined with effective audience targeting can help the campaigns disseminate their campaign messages, get incremental reach, brand-build, engage supporters and attract online fundraising. While both Obama and Romney are investing in paid search, their 3x differential is not that staggering. Display advertising, however, has been a different story.

Comscore Ad Metrix data shows that the Romney campaign delivered 26 million impressions, mostly on Facebook, in April 2012. In the ad below, the Romney campaign also appears to be trying to fuel their social media operation by attracting Facebook fans (“Click Like to stand with Mitt.”) 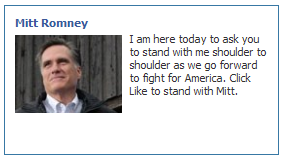 While 26 million impressions in one month is certainly notable, it pales in comparison to
the Obama campaign’s 865 million impressions delivered across hundreds of sites – a difference of 33x. Among the Obama campaign’s most popular use of creative features Michelle, which is understandable given her overall high approval ratings and popularity among women – sure to be a key voter bloc in this year’s election. 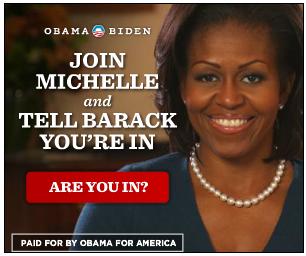 Digital Campaign Operations Will Continue to Evolve
Political candidates have campaigned and advertised since the outset of organized elections, but with the emergence of each new medium comes an evolving set of opportunities for communicating with the voting public. Digital is providing a fast, dynamic and increasingly influential battleground for political campaigns, and in many ways both sides are still figuring a lot of it out. It will be interesting to see how sophisticated the respective campaign operations become as election season progresses, and whether or not their effective – or ineffective – use of the medium ends up making a difference in the outcome of the election. We’ll be sure to know more by November…

Safely Navigating Election Advertising in 2022: A Q&A with L2...