We all know that mobile is important. All you have to do is stand in the middle of Times Square and observe the people around you: at least 50 percent of the crowd will be using their mobile device in some capacity at any given moment.

But these anecdotal observances seem to generally belie what's happening with the broader mobile advertising market, which is still attempting to get out of the gates from a monetization standpoint.

The lagging pace of monetization may have something to do with a dearth of evidence proving that mobile advertising works. The days of boasting of high mobile click-through rates are over, with many marketers realizing the inherent inflation in these numbers stemming from fat-finger syndrome.

Getting into a more grounded discussion about mobile ad effectiveness often requires delving into more sophisticated topics like attribution modeling, marketing mix, brand survey lift, and purchase intent. All of these complex solutions exist to answer whether mobile advertising is effective and to quantify how effective it is.

We're still in the early days of mobile campaign effectiveness measurement. Without a large body of work proving that mobile ads do in fact work, it's important to be able to tell a cohesive story to help demonstrate the value of mobile advertising while the measurement results begin to trickle in.

Big data may be king these days, but a strong narrative can help ideas resonate and spur action. Here is the story to tell of why mobile will begin to effectively monetize, as told in three acts.

Act 1: Mobile is Behind Massive Growth in Digital Media Usage

Total U.S. Internet usage is up – way up – over the past three years. According to Comscore Media Metrix® Multi-Platform, time spent on desktop computers, smartphones and tablets reached 958 billion total minutes in May 2013, representing a gaudy 93 percent increase from May 2010.

While desktop web usage is still increasing, and tablet now accounts for a meaningful share, we can see that smartphone usage is the biggest driver of growth.

Even the most archaic marketing heads will be swayed by this simple chart, which shows that consumer habits are changing and changing fast in favor of mobile. History has shown us that ad dollars eventually follow the consumer, even if the effect isn't always immediate. 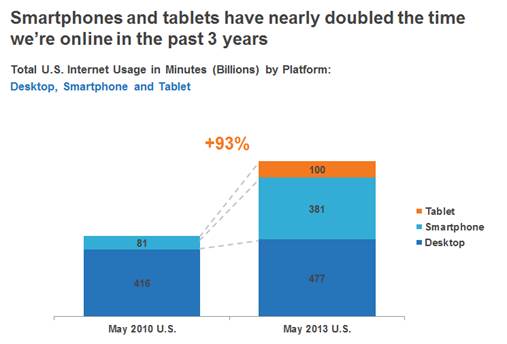 Mobile ad spending needs some context to understand its potential, and Mary Meeker's annual Internet bible offers exactly that. In 2011 we spent 10 percent of our media time on our mobile devices, but the medium attracted only 1 percent of ad spending. This gap represents a staggering $20 billion opportunity if the spending were to come into greater alignment with consumer behavior. 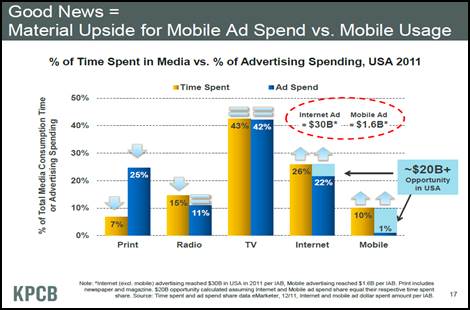 If we look at the course of history, we can expect that these numbers will move into greater equilibrium – which means there's a big opportunity for those companies who jump out ahead of the curve. How close into equilibrium these numbers come will depend on the ultimate ability of mobile ads to influence consumer behavior, but it's a pretty safe bet that there will be significant momentum behind mobile ad spending over the next few years at least.

Act 3: Facebook (and Others) Proven That Mobile Ads Can Monetize

As you may have seen recently, an eye-popping 41 percent of Facebook's $1.6 billion in Q2 revenue came from mobile. Clearly at least one company has figured out how to monetize mobile, which is a very promising sign that the rest of the industry can (and will) follow suit.

Brand advertisers tend to be a savvy bunch. While they might make experimental advertising investments from time to time, they will quickly make efficient allocations of their ad spend based on what's working.

The fact that Facebook has built a multi-billion dollar annual mobile ad business in about a year delivers that simple, anecdotal story that your client leadership requires. Before they dig deep into mobile investment and effectiveness analysis, they want to have confidence that they aren't throwing good money after bad.

Now perhaps Facebook has certain advantages – such as exceptionally high mobile user engagement and a native ad format that works particularly well in mobile – that not every publisher can leverage so easily. But showing that the medium can be monetized and ramped up quickly by getting it right provides a compelling argument that there is a pot of gold at the end of this rainbow.

The Pot of Gold

This type of storytelling is a great way to start the conversation with your clients as to why mobile should matter to them and deserve greater consideration in their ad budgets. But the story can only hold their attention for so long.

Ultimately, your clients need to be convinced that mobile advertising isn't just a fairy tale. Experimentation is fine in the near term, but eventually it must be backed by sound data and measurement that prove its ability to move the needle for marketers.

In the meantime, use the power of story to help convince marketers that an investment in mobile will help bring them closer to that pot of gold.

This story was originally published by Search Engine Watch on 8/12/13.

Why Google’s cookies extension is no reason to take our foot off...