In today’s uncertain economic environment with the lingering effects of the recession, advertisers and agencies are working harder than ever to employ effective advertising approaches. One consistent debate has been whether or not to include a “value claim” – defined as including information about price, value, savings or special offers – in an ad campaign to drive advertising effectiveness in this environment. Recent Comscore research indicates that not only are most consumers no longer buying the brand they want the most in many common categories, at least half of the time they are switching to less expensive brands, suggesting that value claims might be a good way to appeal to consumers.

We know that consumers continue to be value-seekers when making brand choices, but we were curious whether – and to what extent – marketers have responded to this trend by increasing the use of value claims in their advertisements. We also wanted to understand whether value claims have been any more effective since the beginning of the recession. Our research suggests that not only have marketers responded with a dramatic increase in the use of value-claims, but that these ads are moving the needle on in-store sales of fast moving consumer goods (FMCG).

The ARS analytical database for FMCG was used to examine the use of value claims in U.S. TV commercials for which copy testing was conducted. We analyzed the incidence of TV commercials including value claims, as well as the lift in Share of Consumer Choice (Comscore’s key advertising sales effectiveness metric, which has strong validation to predict in-market performance) for ads containing value claims versus all other ads. The data were segmented into Pre-Recession (2001-2007) and Post-Recession (2008-2011) time periods to understand the differences in marketing and consumer behavior.

The results showed that ads including a value claim rose from 5.6% of the FMCG database prior to the recession, to 10.8% in the time period since the start of the recession – a 93% percent increase. It’s perhaps not surprising to see such a stark increase in the usage of value claims post-recession, but were these ads actually effective? 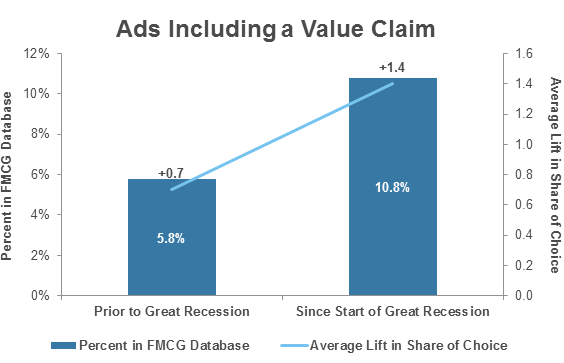 While value claims generally proved effective prior to the recession, they have been much more effective since 2008. Specifically, the average increase in lift in Share of Consumer Choice for the ads with value claims versus all others doubled from +0.7 points prior to 2008 to +1.4 points since the recession began. The +1.4 increase represents about a 20% increase in the selling power of a typical TV advertisement. For a brand in a $2 billion per year FMCG category, the incremental lift in Share of Consumer Choice coming from value claims in a recession would translate into approximately $1 million in incremental sales (vs. an ad without a value claim) over the course of a quarter.

So while the use of value claims are not without their costs – which may include the cost of promotions or dilution of brand equity – they also prove to be quite effective in driving sales in a recession. And when consumers are so cost-conscious and focused on pinching every penny, brands must find ways to meet their needs. Value-based advertising is an effective way to accomplish that objective, and brands are likely to see results at the register.

This post was co-authored by Doug Crang, Comscore Research Director

Comscore and IRI Partner to Reinvent Contextual Targeting with the...