Smartphone Market Led by Android in Software, iPhone in Hardware

The U.S. smartphone operating system market has solidified into a two-horse race between the Android and iOS platforms. The two platforms now combine for 93 percent of the smartphone market, with Android holding onto a majority share at 51 percent and Apple not far behind at 42 percent. Notably, Apple nearly halved the market share gap over the past year from 17 percentage points (53 vs. 36) to 9 points.

Despite its recent market share success and its position as the top smartphone hardware manufacturer, Apple remains one of the only smartphone platforms never to have held the market share lead in the U.S.  a feat that Palm, Microsoft, BlackBerry and Android can all boast.

For more insights about the US smartphone market, download a complimentary copy of the 2014 U.S. Digital Future in Focus report here. 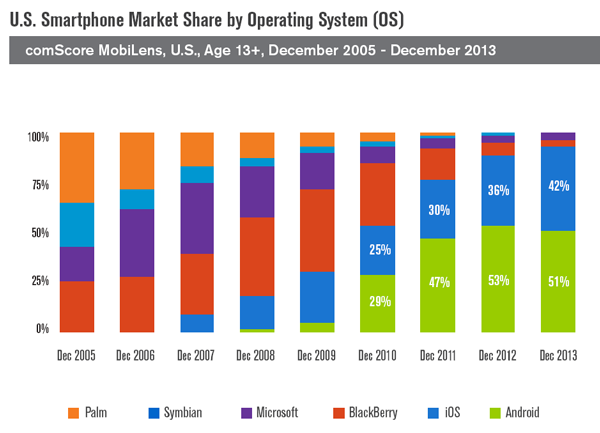