What's Next for the iPhone?

With the impending release of the next iteration of the iPhone, all eyes will be focused on the changes that the next generation of this device brings to the market. When the first iPhone was released in 2007, it paved the way for greater adoption of smartphones among mobile users. Today, iPhone users now account for a third of the 114 million U.S. smartphone users age 13+ as the iPhone continues to carve out an increasing share of this rapidly expanding market.

With the release of newer iPhone models over the years, the device has grown in adoption not just because of improvements made, but also because of efforts made by Apple to bring the iPhone to a broader mass market. Despite the availability of earlier generation iPhone models at significantly more affordable price points, the growth in the iPhones user base as of late appears to come primarily from adopters of more recently-released models. Today, nearly 2 in 5 of the 38.2 million Americans using iPhones are on the iPhone 4, which was released just two years ago. More impressive than that is the fact that 35 percent of iPhone users today are on the iPhone 4S, which was released less than a year ago.

What's next for the iPhone? Read more on our thoughts on the impact the next iPhone could have on the digital media industry at large on the Comscore Voices blog. 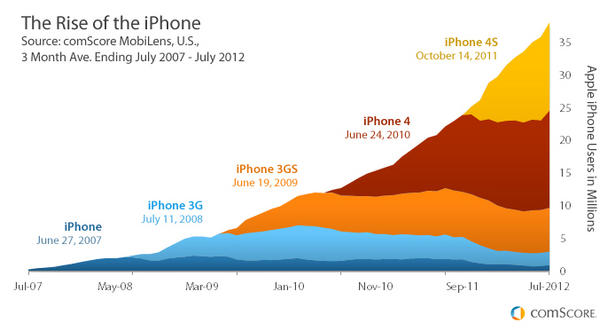