RESTON, VA, November 25, 2008 – Comscore (NASDAQ : SCOR), a leader in measuring the digital world, today reported its tracking of holiday season retail e-commerce spending for the first 23 days of the November – December 2008 holiday season, as well as its official spending forecast for the season. For the holiday season-to-date, $8.2 billion has been spent online, marking a 4-percent decline versus the corresponding days last year.

*Corresponding days based on equivalent shopping days prior to Thanksgiving (October 27 thru November 18, 2007)

“Despite the recent reprieve that plummeting gas prices have given American consumers, the depressed and volatile stock market, declining housing prices, inflation and the weak job market all represent dark clouds hanging over their heads this holiday shopping season,” said Comscore chairman, Gian Fulgoni. “With consumer confidence low and disposable income tight, the first weeks of November have been very disappointing, with online retail spending declining versus year ago. It’s also likely that some budget-conscious consumers are planning to wait to buy until later in the season to take advantage of retailers’ even more aggressive discounting.”

Comscore’s forecast is that holiday online retail spending for the November – December period will be flat versus year ago, significantly lower than last year’s growth rate of 19 percent and below the retail e-commerce growth rate of 9 percent that has been observed for 2008 year-to-date.

“Assuming the stock market doesn’t deteriorate materially during the season and that there is no apocalyptic news of major financial institutions, manufacturers or retailers failing, we should see online spending growth inch back towards positive as we get deeper into the season,” added Fulgoni. “However, if there is any more significant bad news just over the horizon, all bets are off.”

Alongside its reporting of behaviorally monitored e-commerce spending, Comscore is also conducting weekly surveys of approximately 500 consumers to determine attitudes and sentiment in regard to the holiday shopping season.

In the most recent survey, conducted between Friday, November 21 and Monday, November 24, 33 percent of consumers said they had not even begun their holiday shopping yet. They also indicated they intended to cut back on holiday spending in several ways, most notably by buying fewer gifts (47 percent of respondents) and buying less expensive gifts (46 percent of respondents). Respondents also said they planned to employ the Internet to help cut costs, by taking advantage of free shipping and/or no sales tax (39 percent). 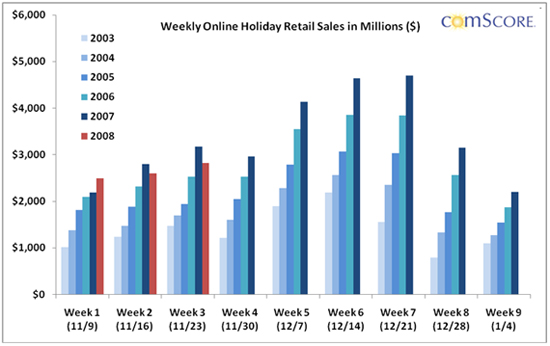 Members of the media interested in receiving the data behind the above chart for use in a graphical representation, please contact press@comscore.com

Comscore to Present State of Retail Webinar on Evolving...