Green Monday (Dec. 10) Expected to Headline What Could be the Biggest Online Spending Week in History

RESTON, VA, December 12, 2012 – Comscore (NASDAQ : SCOR), a leader in measuring the digital world, today reported holiday season retail e-commerce spending for the first 40 days of the November–December 2012 holiday season. For the holiday season-to-date $29.3 billion has been spent online, marking a 13-percent increase versus the corresponding days last year. Green Monday (Dec. 10) reached $1.275 billion in spending, up 13 percent vs. last year and ranking as the third heaviest online spending day for the season-to-date after Cyber Monday ($1.465 billion) and Tuesday, Dec. 4 ($1.362 billion).

“Green Monday kicked off this critical week for online holiday shopping with a strong total of $1.275 billion, marking a 13-percent gain from last year,” said Comscore chairman Gian Fulgoni. “While Green Monday remains a very important day for the season, as consumers have gained confidence with on-time shipment delivery, there is perhaps less urgency than there once was to make those final purchases at least two weeks in advance of Christmas Day. What we’ve seen over the past few years is a tendency for heavy spending to continue late into the week of Green Monday and right up until Free Shipping Day, which this year falls on December 17.”

The top-gaining category for the season-to-date is Digital Content & Subscriptions, predominantly comprised of digital book, music and video downloads, which has grown 22 percent versus year ago. Toys ranks second with a growth rate of 18 percent, followed by Video Game Consoles & Accessories (up 15 percent). Consumer Electronics currently ranks fourth (up 15 percent) on the strength of smartphone sales, while Computer Hardware rounds out the top five (up 14 percent) on the strength of tablet sales. 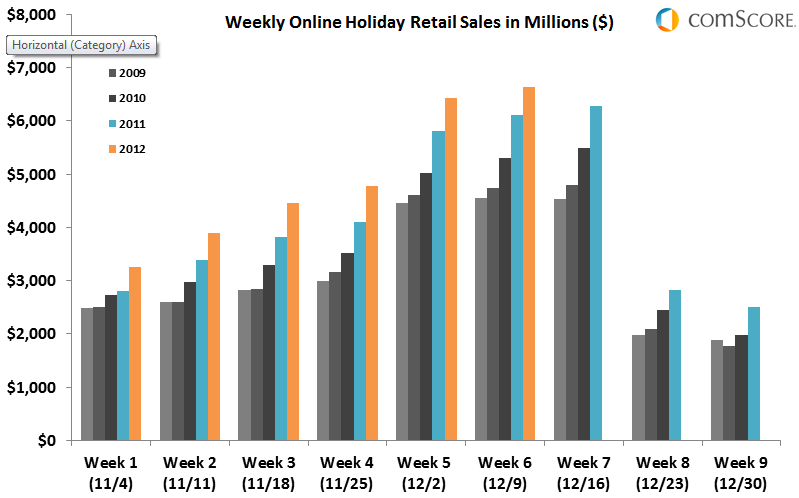