RESTON, VA, November 26, 2013 – Comscore (NASDAQ : SCOR), a leader in measuring the digital world, today reported holiday season retail e-commerce spending for the first 24 days of the November-December 2013 holiday season, as well as its official spending forecast for the season. For the holiday season-to-date, $18.9 billion has been spent online using desktop computers, marking a 14-percent increase versus the corresponding days last year. Tuesday, November 19 has been the heaviest online spending day of the season to date at $963 million. Two other shopping days – Thursday, November 14 and Sunday, November 24 – have also seen at least $900 million in online retail spending.

“The 2013 online holiday shopping season is off to a solid start with nearly $19 billion in desktop e-commerce sales, an increase of more than 14 percent versus last year,” said Andrew Lipsman, Comscore VP of Marketing & Insights. “The heaviest online spending day thus far fell just shy of $1 billion in sales, and though we’ve not yet reached that benchmark we can expect to see that spending threshold eclipsed numerous times during the post-Thanksgiving period. Black Friday and Cyber Monday can both be expected to easily surpass that total, with Cyber Monday already beginning to point toward $2 billion.”

“While the early part of the online holiday shopping season has been solid so far, we are tempering our expectations given the shortened 26-day shopping period between Thanksgiving and Christmas this year,” added Lipsman. “In addition, with Hannukah beginning in November this year there is some spending that has been pulled forward and likely added a boost to the early November shopping period. That said, our forecast of 14 percent growth for desktop-based buying still represents a strong outlook versus last year that highlights the continued channel shift to online. We also expect m-commerce spending growth to contribute about 2 percentage points to that growth rate, meaning that total digital commerce will grow at a rate of nearly 16 percent.”

Comscore expects mobile commerce (i.e. buying on smartphones and tablets) to reach $7.1 billion for the November-December holiday season, representing 13 percent of total digital commerce. Total spending across digital channels is expected to be $55.2 billion for the season. 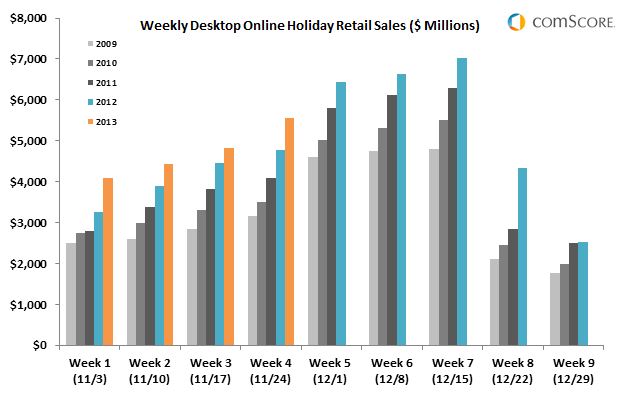