Green Monday Jumps 10 Percent to $1.4 Billion in Desktop Sales to Rank as 3rd Heaviest Day of the Holiday Season-to-Date

RESTON, VA, December 11, 2013 – Comscore (NASDAQ : SCOR), a leader in measuring the digital world, today reported holiday season U.S. retail e-commerce spending from desktop computers for the first 39 days of the November-December 2013 holiday season. For the holiday season-to-date, $31.5 billion has been spent online, marking a 9-percent increase versus the corresponding days last year. However, as we have noted in previous releases, Thanksgiving Day falls six days later this year than last and causes more heavy spending days to fall in the year ago period, thereby diluting growth rates at this point. For example, we see a 25-percent increase if using the alternate comparison of the 4-week period preceding Thanksgiving.

*Corresponding days based on corresponding shopping days (November 2 thru December 10, 2012)

“Online buying for the period since Thanksgiving has been very strong and indicates that e-commerce is on track to meet expectations,” said Comscore chairman Gian Fulgoni. “While Green Monday saw a strong desktop spending total of $1.4 billion, its 10-percent year-over-year growth rate might at first seem somewhat underwhelming given the growth rates we’ve seen for other important days this season.”

Added Fulgoni, “However, there is an interesting emerging storyline that helps speak to what’s happening during this year’s very unique holiday season. It would appear that the abbreviated calendar between Thanksgiving and Christmas is compelling shoppers to complete more of their online buying during the weekends – with this most recent weekend boasting an exceptional 71-percent gain from last year, following on the heels of last weekend’s 34-percent jump. The weekend is typically a lighter period of online buying than during workdays, but the weekend surges we’re seeing may be attributable to the effects of showrooming, with the in-store shopping experience increasingly getting disrupted by comparison shopping on mobile phones, leading to more conversions online after leaving the store. Of course, it’s also likely that many consumers realize the holiday spending clock is ticking and are urgently buying their gifts whenever they have time. And that, in turn, works to the benefit of e-commerce.” 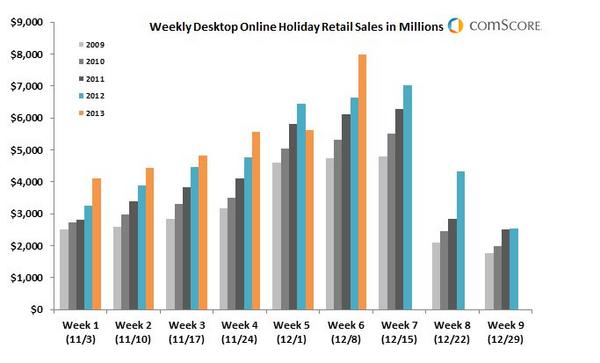