RESTON, VA, December 17, 2014 – Comscore (NASDAQ : SCOR), a leader in measuring the digital world, today reported holiday season U.S. retail e-commerce spending from desktop computers for the first 44 days of the November-December 2014 holiday season. For the holiday season-to-date, $42.5 billion has been spent online, marking a 15-percent increase versus the corresponding days last year. The most recent week beginning with Green Monday (Dec. 8) posted strong growth in online sales, taking in $8.6 billion in desktop spending, up 12 percent versus year ago. For the second consecutive week, all five days of the work week reached the milestone of at least $1 billion in online desktop sales, marking the first time in history such a feat had been accomplished twice in the same holiday season.

*Corresponding days based on corresponding shopping days (November 2 thru December 15, 2013)

“Despite a slight deceleration in growth rates during this past week, we still observed strong spending in total with five more days surpassing $1 billion in sales to bring us to fourteen for the holiday season to date,” said Comscore chairman emeritus Gian Fulgoni. “While it’s not uncommon for the week after Cyber Week to experience a relative lull as retailers pull back on promotions and consumers catch their breath before the final gift buying push, it is encouraging that the 15 percent spending growth rate for the season-to-date remains slightly above our forecast of 14 percent for the season as a whole. We expect early next week to experience one last surge in online buying leading up to Free Shipping Day on December 18th, after which the online holiday shopping season should start winding down.” 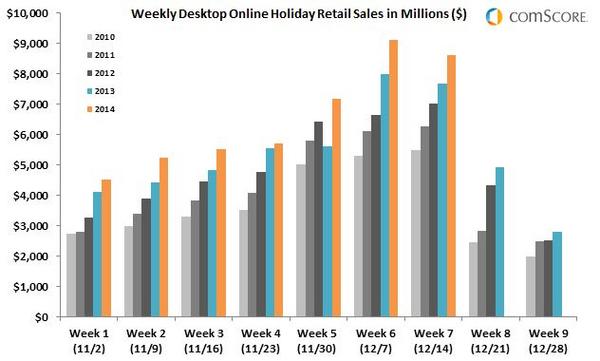