Smart Buzz: A UK and US comparison of the CES halo effect on consumer electronics The 2020 edition of CES, the consumer electronics annual jamboree in Las Vegas, is coming to an end. As usual, it showcased a bewildering range of smart gadgets, and whilst some will soon appear in a retail store near you, others will descend into oblivion, but all of them give us an intriguing glimpse into the future.

But to what extent does the fame of CES extend beyond the US? Given the consumer electronics binge in the weeks that immediately precede CES (Black Friday, Cyber Monday, Christmas and Boxing day sales), can the buzz generated by such a large event lift consumer electronics sales in January? How are brands impacted by their presence at the event?

Perhaps surprisingly, the uplift in traffic to technology news sites is more pronounced in the UK than it is in the US – the country hosting the event. In both countries however, traffic to consumer electronics retail sites dipped in the month of January 2019, probably a sign of the fact that most consumers had already purchased their favourite gadgets during the holiday season in December 2018 and decided to leave their credit cards to rest.

The 2019 edition of the event will probably be remembered as the year when 8K television – led by LG - made its debut and Impossible Burgers stunned the food scene with its vegan-friendly patties. This wide range of products - from ‘traditional’ tech such as TV, phones, and computers to the more exotic wearables, smart homes and driverless car innovations – and vegan burgers, make comparisons between brands hard to pull off. For the analysis that follows, we therefore limit ourselves to handful of companies with a large international footprint, who had a significant presence at the CES event, as reported in the media. 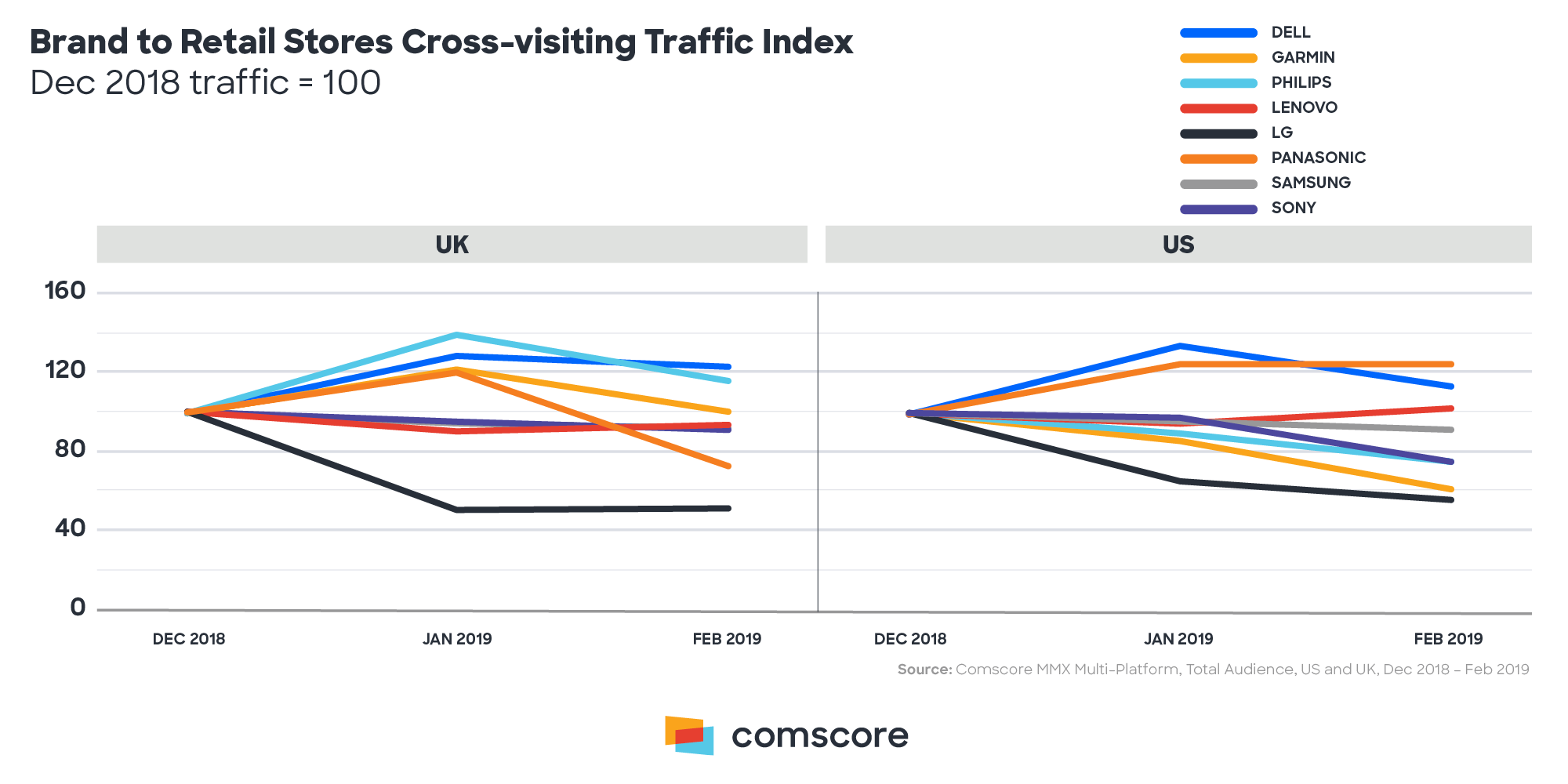 As is evident from the above charts, the month-on-month variations in cross-visiting index (that is, the number of consumers who visit both a brand’s website and an online retail store, with December 2018 set as the base month) differs by country: consumers in the UK who visited websites from brands such as, Dell, Garmin, Philips, and Panasonic were more likely to visit an online retail store in January than in December. Lenovo, LG, Samsung, and Sony experienced no such uplift in January 2019. In the US, Dell and Panasonic saw a possible ‘CES uplift’.

To sum things up, CES, boldly held every January, helps to re-invigorate the consumer electronics industry market after the holiday shopping is done. Though technology news sites have done well to capitalise on the excitement, as seen by the January boosts in visitation, consumer electronics manufacturers in the US and UK may find more ways to link the excitement back to their own online brand properties. Obviously, it would be naïve to attribute the increase/decrease in cross-visiting traffic entirely to CES: the brands included in the charts have different objectives, and, more importantly, different release dates for their products. But an interesting observation is that brands which launch their products off the back of the event, such as Dell, with its lauded XPS 13 laptop which launched in January 2019, can use - and have used - events such as CES to meet both brand awareness as well as conversion objectives.

To learn more about how Comscore can help with U.S. and U.K. global insights, please  contact us.

Beyond the Headlines: Unpacking Common Narratives in Media and Advertising