How the “Buy Button” Can Help Fill the M-Commerce Gap

How the “Buy Button” Can Help Fill the M-Commerce Gap

While mobile has been quick to gain the attention of consumers, it has been much slower at driving dollars. Comscore’s recently released Q1 2015 data shows that while 59 percent of digital shopping time occurred on mobile devices, smartphones and tablets only drove 15 percent of total e-commerce spending – a phenomenon we call the “M-Commerce Gap.” Those interested in finding out more detail behind the latest trends on mobile commerce and its associated monetization gap can download our newly released report: The M-Commerce Gap: Why Dollars Continue to Lag Shopping Behavior on Mobile. 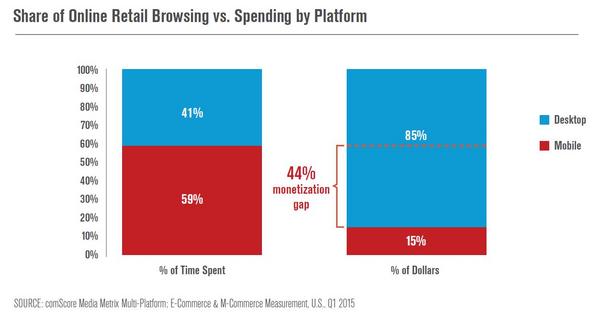 There is good reason for this gap, and it ultimately boils down to the fact that mobile simply has a lot more friction than desktop when it comes to completing a transaction. Mobile screens are smaller, pages tend to load slower, connections are spottier, checkout hasn’t always been optimized for mobile, etc. It is very likely that the current gap we see will never get completely filled, but we would expect things to move significantly in that direction. And in fact, that’s already started to happen as we’ve recently seen m-commerce growth rates expand from around 30 percent year-over-year to 53 percent in the most recent quarter.

What’s it going to take to see mobile begin to break off a bigger chunk of dollars? Ultimately it will be about how much friction can be removed from the mobile buying experience. Some of these things will happen organically over time as users acclimate to the experience, but the behavior can be accelerated greatly by technology improvement designed to remove friction.

Several recent announcements and news stories about influential digital media companies introducing “buy buttons” suggest a common theme. The idea being that the simplicity of a “buy button” can draw a more direct line to move the consumer through the conversion process, which is important in any context but especially in mobile. Perhaps most notably, Google recently confirmed its upcoming integration of a buy button that will appear alongside relevant searches, beginning with mobile. A buy button means less friction, and less friction means a greater ability to unlock the tens of billions of commerce dollars just waiting to shift to mobile.

To find out more how the m-commerce market is evolving and what opportunities await, download our latest report.