The category has shifted quickly to mobile, with 80% of time spent now coming from smartphones and tablets. Recent Comscore Mobile Metrix data shows that preferences between tablets and smartphones for social media usage vary depending on the age of the user.

The average 18-44 year-old smartphone social networking user spends in excess of 25 hours per month consuming social content on that device, while the numbers are considerably lower for those age 45+. However the reverse is true on their larger screen mobile counterparts, as tablet social networkers age 35+ spend more than 17 hours per month on those devices, while 18-34 year-olds spend far less on average. 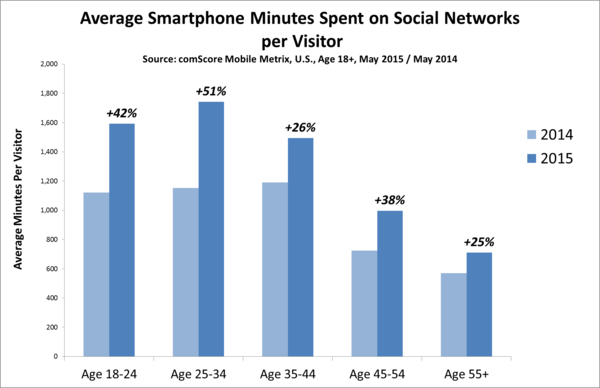 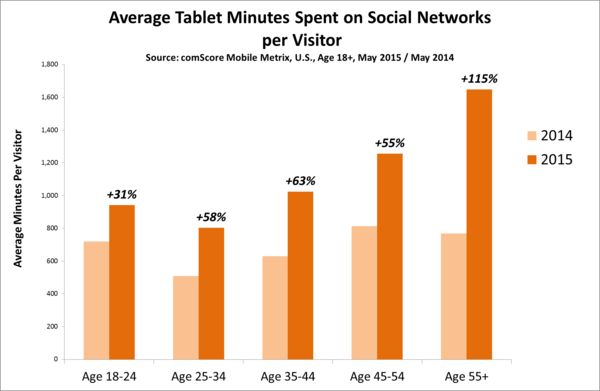 A possible explanation for these differences is that the older digital consumers haven’t proved to be as “addicted” to their smartphones as Millennials certainly are. While many Millennials view their smartphones as their digital lifeline – in other words, their primary and most personal access point to the internet’s unlimited supply of information and communication channels – older generations seem to prefer the ‘sit-back’, larger screen experience that more closely resembles the days of reading a newspaper, a book, or even using a laptop computer.

The charts above also show that platform preference by age has become even more exaggerated over the past year. Growth in smartphone engagement outperformed that of tablets by the largest degree among the youngest age group (42% vs. 31% increase). Overall, the largest difference in percent growth between tablet and smartphone use occurred within the 55+ age group, where tablet increased 115% from 2014, while smartphones only had a year-to-year increase of 25%. If these platform preferences continue to diverge, social networks might benefit from these different usage dynamics to better target their audience with content and ads better suited to the respective platforms.

All things considered, social networks stand in an enviable position with mobile engagement growing at least 25% year-over-year across every age group. While social as a whole is still one of the faster growing categories in the digital media landscape, it’s important to bear in mind that different segments of the population engage with digital behaviors in a wide variety of ways.

For more insights and a deeper understanding of digital media audiences, please reach out to your Comscore representative or: