Multi-Platform Media Usage is Not a Zero Sum Game

Multi-Platform Media Usage is Not a Zero Sum Game

There are some things in life that you don’t have to be good at to enjoy. I am a below average golfer, but I absolutely love to get out on the golf course. Same thing with video games; I can kill computer aliens in a respectable fashion, but put me up against a crack team of 13 year-old gamers in a multi-player tournament and I’ll get crushed.

But an important thing to remember is how my enjoyment evolved over time as I improved. The first time I broke 100 on the golf course you would have thought I just had my first child I was so excited, and from that point forward I couldn’t stop reserving tee times at every turn. One would think I would saturate my appetite for golf with so many rounds, but that wasn’t the case – the better I got the more I wanted to play.

This same concept applies to your media and internet consumption. Conventional wisdom would suggest that in this age of media fragmentation, usage of multiple devices – TVs, PCs, smartphones, and tablets – would inevitably cannibalize one another. After watching hours of TV, the last thing you’d want to do is pick up your tablet, stare at another screen, and start surfing the web, right? But in a similar fashion to my golf obsession and the impact my improvement had on that desire, evidence suggests that the more devices you use, the more media you consume. It’s not a zero sum game.

Think about the media brands you engage with most frequently on your primary computer. Doesn’t this selection of websites closely correspond with many of the apps on your smartphone or tablet? For the content you love to engage with, you’ll often seek out additional opportunities to engage if they’re available. Engagement tends to beget engagement.

But this line of thinking isn’t just conjecture; we actually have some interesting data to support this point. In a watershed research initiative conducted with NBC for the 2012 London Olympics, we recruited a panel of Olympics enthusiasts whose media consumption habits we could observe across multiple platforms to better understand how consumers engage with multiple screens throughout the day in today’s media environment. As the graphic below illustrates, the more platforms used to consume NBC Olympics content, the greater that user’s overall engagement. But perhaps more significantly, it wasn’t just that they consumed more content overall – in many instances those who used mobile devices actually spent more time consuming via the primary (TV) and secondary (PC) media channels. 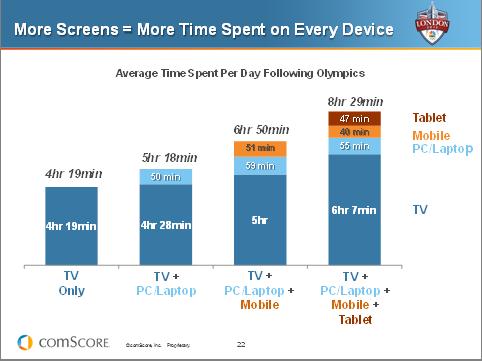 Looking at TV (in this case the primary consumption channel), the average time spent per day consuming Olympics content for TV-only users was 4 hours 19 minutes. But that figure for TV begins to increase among segments accessing content via multiple devices, all the way up to 6+ hours for those who viewed the Olympics across 4 screens. While those who consumed Olympics content across multiple devices may inherently be more engaged viewers, it would also seem that the supplementary channels served to reinforce engagement with the primary channels.

Often marketers and media companies will ask me if they need to have a mobile strategy. My response is that it’s better to have an integrated multi-platform strategy, with mobile just being one component of it.  Now that may require developing some mobile-specific strategies – whether that’s building an app or executing a mobile ad campaign – but they should be developed with the broader picture in mind.

A more holistic understanding of audiences and engagement across channels provides insights to help design strategies that maximize value for marketers and media companies alike. Without understanding the waterfall of engagement that occurs with incremental device usage, opportunities may be overlooked to not only reach and engage larger audiences, but also to reinforce the value of their primary media platforms.

This article was originally published on Search Engine Watch on 3/25/13.