Donald Trump supporters weren’t the only ones to win big this Presidential Election season. Newspaper and Political News websites were other major beneficiaries from an election that demanded intense media coverage throughout and provided relentless headline-worthy material that news organizations could capitalize on.

Data from Comscore Media Metrix® Multi-Platform shows that the total time spent on Newspaper sites was up 39% from two years ago, while Political News sites saw their audience engagement increase by nearly 4x over that same period. Driving this surge in total time spent was an uptick in the number of online visitors at these sites (+5% vs. Oct. 2014 for Newspapers, +57% for Political News) and their spending of more time per visitor engaging with the content than they previously had (+32% for Newspapers, +146% for Political News). The U.S. Presidential Election and the countless stories reporting on it are responsible for much of these increases. In the Political News category, we saw peaks in audience engagement in the month leading up to the general election (October 2016) and the month where the presidential primary elections were in full swing (March 2016). 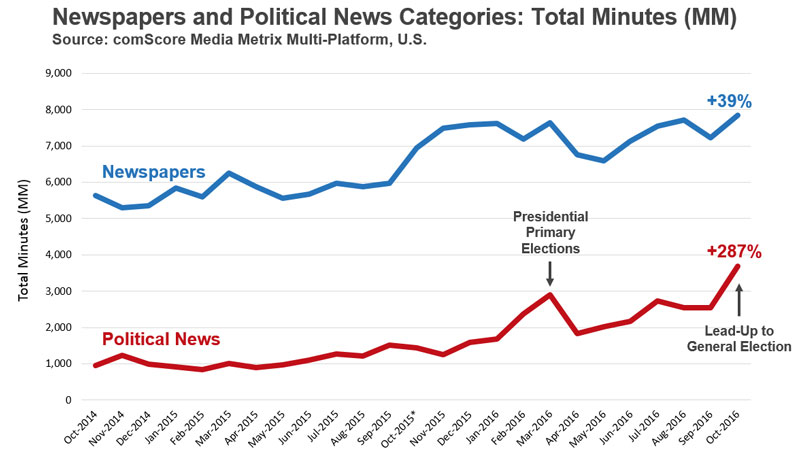 * Total Minutes for the Newspapers category in October 2015 was recalculated to remove the impact of overstated data for an individual mobile news app that had a substantial impact on topline category time spent.

To read more on this topic, check out our previous post where we describe the state of mobile news in just three charts.

COVID-19 and the Auto Industry’s Reckoning