The search for information and news around the UK’s historic referendum on the EU membership had a dramatic impact on digital behaviour. Key content categories such as Politics and Government saw significant changes to their audience behaviours and compositions, while mobile devices played a key role for instant news. The ‘referendum effect’ also extended beyond the UK, as international visitors used local sources to make sense of proceedings.

The political sections of News/ Information sites were natural beneficiaries

The referendum helped drive substantial increases in the number of visitors to politics sections of news /information websites in the UK.  While the total digital population of the News/Information category remained flat during the first half of the year, the audience of the politics category grew 136 percent across all devices, reaching 51.3% of the total digital population in June 2016. The Guardian Politics ranked 3rd in the world with the news around politics ranking during June 2016, a 529% increase in their worldwide population from January 2016 to June 2016. 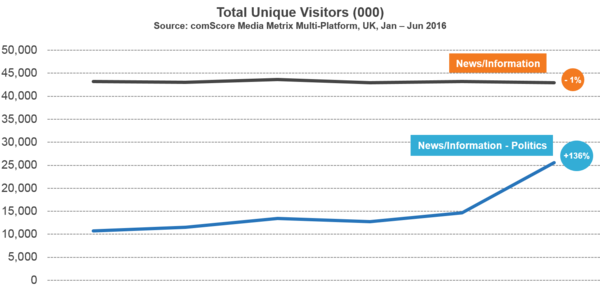 Whilst all devices showed increases, mobile (smartphone and tablet) time spent on politics sections increased 702% between January and June 2016. Mobile proved essential, with mobile only and multi-platform users accounting for two thirds of the category’s total digital audience. The UK audience also spent 5x more time in the category on their tablets, with 38% of the total tablet audience in the country visiting this type of content in in June 2016.

Did Millennials wait until the last minute to register?

Showing the biggest growth in the News/information - Politics category across Europe, ABOUTMYVOTE.CO.UK was the 5th most accessed website in its category in June 2016. This surge in activity was largely driven by a growing share of Millennials, who dominated the site’s audience in June.

Seeking news at source, the ‘referendum effect’ delivered new international audiences to the UK news properties. BBC News, for example, had dramatic uplift for users in Germany, where the audience increased by over a third in June compared to earlier in the year. Increases in France and Spain were also ahead of the uplift experienced at home in the UK. Despite being further away geographically, the EU Referendum likely contributed to the 11% uplift seen in BBC News’ audience in the USA. 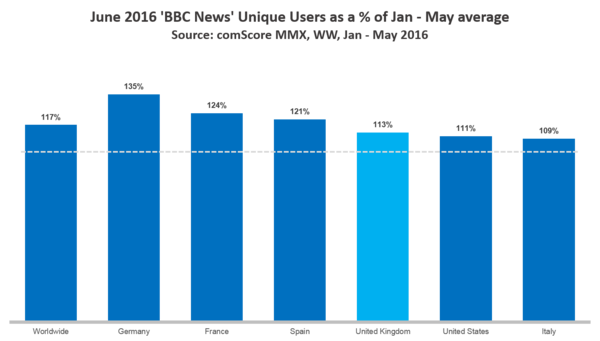 MMX Multi-Platform can help you understand your target audience size and engagement across devices. All of these metrics can be compared across digital media platforms and used to understand incremental or complementary activity coming from each platform.

To understand what else you can – and should – learn from our MMX Multi-Platform data: Request a demo or contact us.

Can cookie-free audiences perform as well as cookie-based ones? Spoiler...