The number of smartphone users in the EU5 countries (Spain, Germany, Italy, France and the UK) grew by 30 percent over the year, reaching 136.2 million in the three month average ending December 2012. This was the first month that all European countries crossed the 50 percent smartphone penetration mark.

Spain leads the rankings with 66 percent of mobile users owning a smartphone in December 2012, followed by the UK with 64 percent  both countries were above the European average of 57 percent. In France and Italy, smartphone ownership was at 53 percent amongst the mobile population, with Germany concluding the rankings at 51 percent during the three month average ending in December 2012.
For more country specific insights into the mobile and online landscape, you can download our free series of 2013 Future in Focus reports for Germany, France and the UK. These reports include the latest trends in digital behaviour, social media, search, ecommerce, online advertising and mobile. 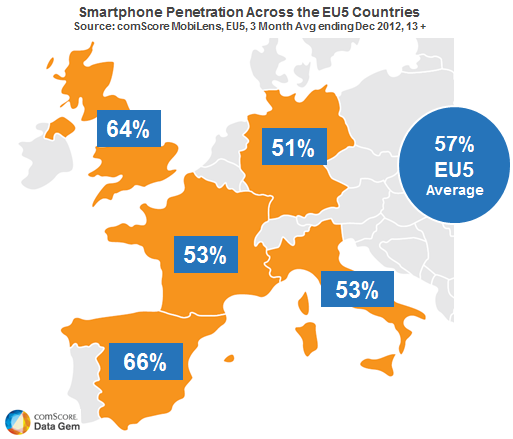