Although we now live in a digital world featuring a multi-platform majority, many large media properties focus more of their efforts on a particular platform, whether its for practicality, a better user experience, or some other reason. That primary platform used to be the desktop computer, but an increasing share of the digital landscape is now occupied by mobile-first companies. In fact, some of the top properties have been so successful with their mobile platform that a majority of their audience visits exclusively via mobile devices (i.e. smartphones and tablets).

In June 2013, Zynga, Groupon, and Pandora led the top 100 digital media properties with the highest percentage of mobile-only visitors, each with more than two-thirds of their respective audiences coming exclusively from mobile. By comparison, the average of the top 100 digital media properties had less than one out of three monthly visitors (31%) access their brand content only from mobile devices.

Perhaps most interesting about these top mobile properties is that there is very little cross-over between their desktop and mobile audiences. Whereas the total Internet audience now has a majority (54%) of users consuming media on both desktop and mobile devices, the ten selected mobile-first properties only have an average of 11 percent of their audience falling into this category. This insight tells us that while the general digital population is increasingly using multiple devices to engage with content, people still have platform preferences depending on what function they need a particular media property to serve. For this reason, its imperative to understand who your audience is, what is important to them, and how each platform serves their wants and needs. 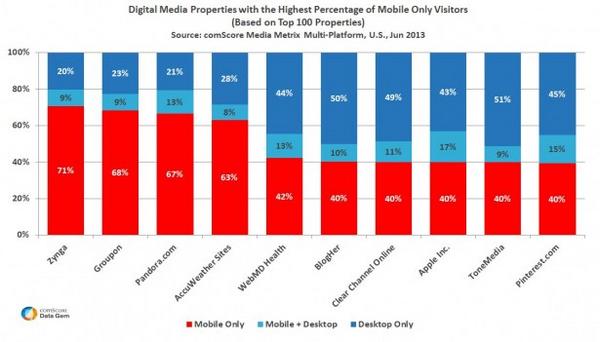