RESTON, VA, December 11, 2007 – Comscore, Inc. (NASDAQ: SCOR), a leader in measuring the digital world, today released an update of holiday season e-commerce spending for the first 39 days (November 1 – December 9) of the November – December 2007 holiday season. Nearly $19 billion has been spent online during the season-to-date, marking an 18-percent gain versus the corresponding days last year. Thursday, December 6 recorded $803 million in online sales, up 28 percent versus year ago, making it the heaviest online spending day in history.

“This past week was very strong for online retailers as consumers spent more than $4.6 billion online, up 20 percent versus year ago, making it the heaviest week of the holiday season to date,” said Comscore Chairman Gian Fulgoni. “Consumers seemingly restrained their early November holiday spending in the hopes of catching some attractive late-season deals, so we expect that the current week will outperform the past week as the heaviest of the season.”

Some additional findings during the most recent week:

During this year’s holiday season, online spending has peaked during the middle of the day, driven by the heavy influence of shopping from work, with work buying accounting for 45 percent of all e-commerce dollars spent this holiday season. More than half of all online dollars were spent between the hours of 9:00 AM – 3:00 PM, with the heaviest spending (26.9 percent) occurring during the 12:00 PM – 3:00 PM time segment. Nearly 10 percent of online spending occurred between 10:00 AM – 11:00 AM and 1:00 PM – 2:00 PM, making them the peak individual hour segments during the day. 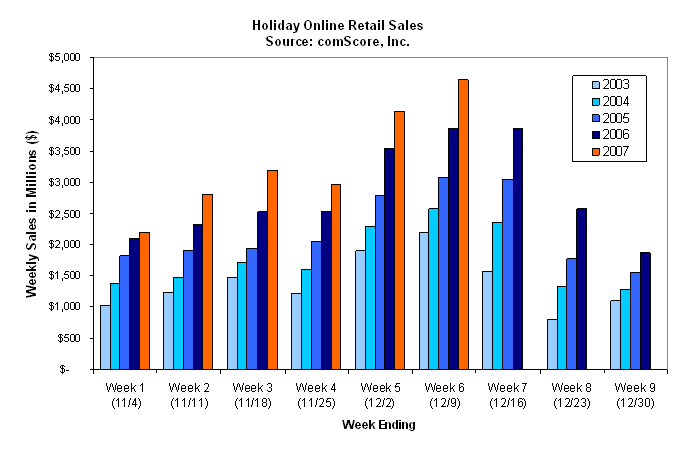 Please contact press@comscore.com to receive the data behind the above for use in graphical representation.

About Comscore
Comscore, Inc. (NASDAQ: SCOR) is a global leader in measuring the digital world. This capability is based on a massive, global cross-section of more than 2 million consumers who have given Comscore permission to confidentially capture their browsing and transaction behavior, including online and offline purchasing. Comscore panelists also participate in survey research that captures and integrates their attitudes and intentions. Through its proprietary technology, Comscore measures what matters across a broad spectrum of behavior and attitudes. Comscore analysts apply this deep knowledge of customers and competitors to help clients design powerful marketing strategies and tactics that deliver superior ROI. Comscore services are used by more than 800 clients, including global leaders such as AOL, Microsoft, Yahoo!, BBC, Carat, Cyworld, Deutsche Bank, France Telecom, Best Buy, The Newspaper Association of America, Financial Times, ESPN, Fox Sports, Nestlé, Starcom, Universal McCann, the United States Postal Service, Verizon, ViaMichelin, Merck and Expedia. For more information, please visit www.comscore.com.