RESTON, Va., February 8, 2021 – Don’t let the box score fool you. Tom Brady may have won another ring, but Super Bowl LV was hardly a replay for the brands who did (and didn’t) invest in commercials and sponsorships for the big game. For the first time, Comscore (NASDAQ: SCOR), a trusted partner for planning, transacting and evaluating media across platforms, joined forces with Hive, a leading provider of enterprise AI solutions, to analyze marketing within and around TV advertising’s biggest day.

Super Bowl LV concluded an NFL season that was anything but ordinary. The one constant, however, was the NFL’s importance to the TV ecosystem and brands seeking to optimize their audience engagement. Comscore’s TV Measurement shows relatively flat ratings for the 2019 vs. 2020 season despite the unique challenges the league encountered during the pandemic. And the playoffs showcased the enduring appeal of the NFL, with Comscore capturing a year-over-year ratings increase of approximately 10 percent for the 2020 NFL Conference Championship games.

Here are the key insights from Super Bowl LV, courtesy of Comscore and Hive:

Fewer Cars; Still Lots of Beer and Snacks
While pre-game headlines highlighted several stalwart Super Bowl advertisers who opted to sit out this year’s game, returning advertisers from last year’s telecast ultimately secured 56% of national commercial minutes – up from 52% last year. Anheuser-Busch again led share of voice among advertisers, with 4 minutes and 45 seconds of commercials across its portfolio of brands – even with Budweiser taking the year off (see Figure 1). 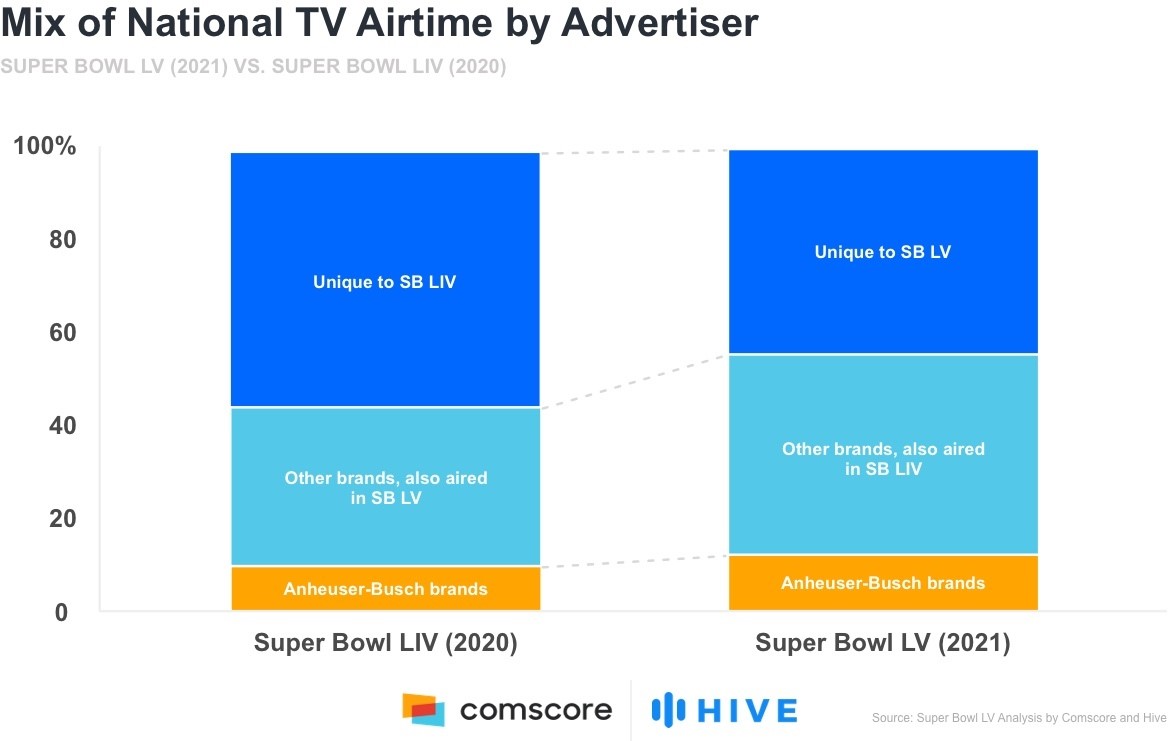 While consumer goods advertisers made up just under 10% of estimated national TV ad spend during the 2020 NFL regular season and playoffs, the category again captured the highest Super Bowl share of voice with 31% of national ad minutes (see Figure 2). Returning big game advertisers included Anheuser-Busch's Bud Light and Michelob Ultra, PepsiCo’s Doritos and Cheetos, and Proctor & Gamble’s Tide. Kimberly-Clark's Huggies and Dr. Squatch were among the brands debuting their first ever Super Bowl ads, offsetting Coca-Cola and other consumer goods brands who were idle this year.

Automotive advertisers decreased share of voice the most year-over-year, dropping to 16% of national ad minutes compared to 21% of airtime last year. Audi, Hyundai, Kia, and Porsche were among the automakers who sat out this year’s Super Bowl after advertising in last year’s game. 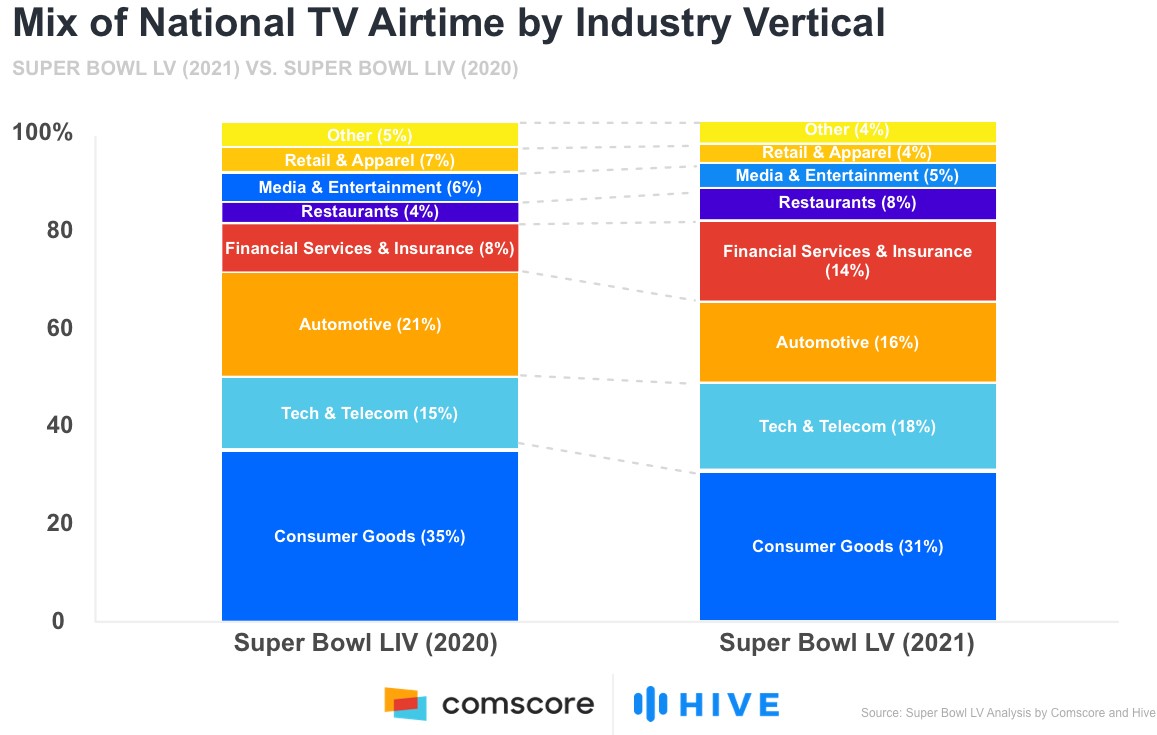 Messaging Features Fewer New Product Announcements, Limited References to Current Events
During 2020, monitoring creative messaging became more focal than ever, with brands and agencies navigating uncharted territory in how to communicate through a global pandemic, recurrent social issues, and a divisive political climate.

For the most part, brands steered clear of referencing current events in their Super Bowl advertisements. Only two advertisers – Bud Light and Bass Pro Shops & Cabela’s – directly made reference to the challenges of the past year.

Less prevalent in this year’s commercials was new product announcements. While the Super Bowl is often the coming out party for new cars, devices, films, and more, only 29% of national TV commercials this year introduced new products, down from 40% last year.

Another significant change year-over-year included a sharp decrease in advertisers’ references to websites, apps, and hashtags. Only 29% of commercials featured an online call-to-action compared to 56% last year (see Figure 3). 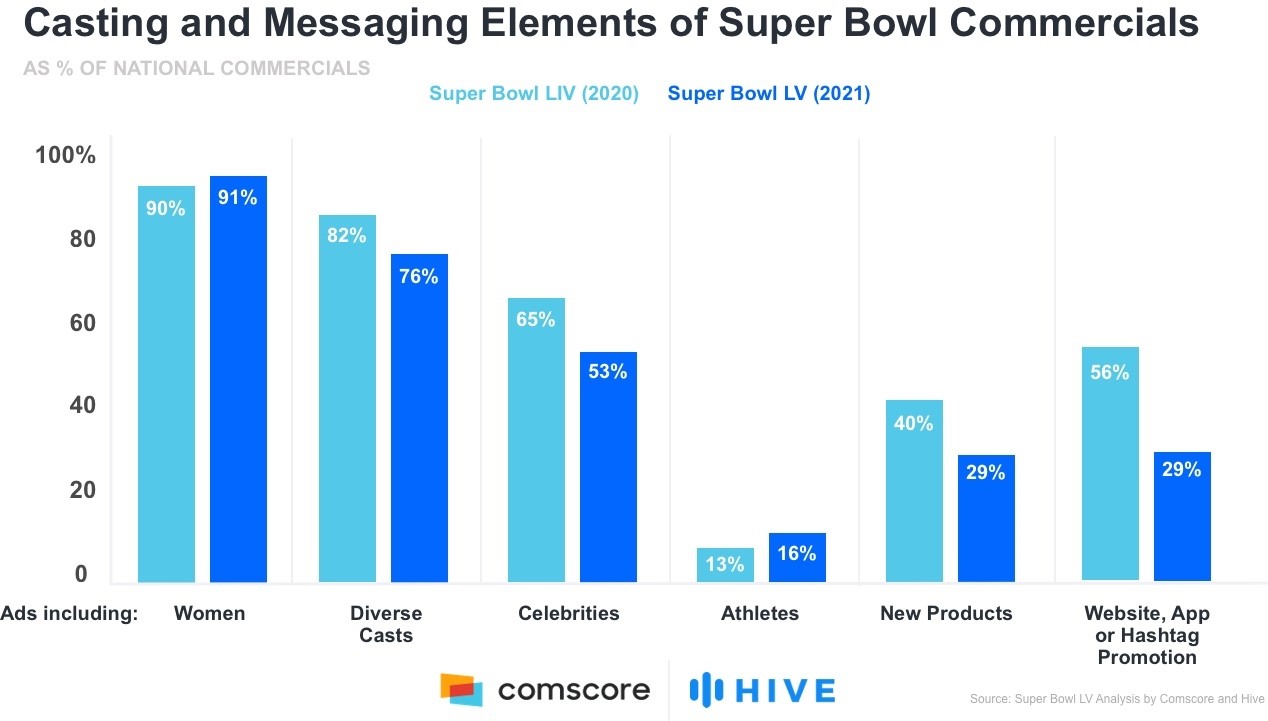 Hive’s proprietary logo detection model, trained to automatically detect exposure for more than 5,500 brands with more than 220 million individual pieces of human-labeled training data, was used to measure the quantity of logo placements within the TV broadcast of the game and halftime show.

In total, 12 brands surpassed 30 seconds of cumulative brand exposure within the Super Bowl LV telecast (not including the pre- and post-game shows and excluding league, team and network brands). Nike achieved the greatest exposure by a large margin, followed by Verizon, Gatorade, Bose, and Pepsi (see Figure 4). 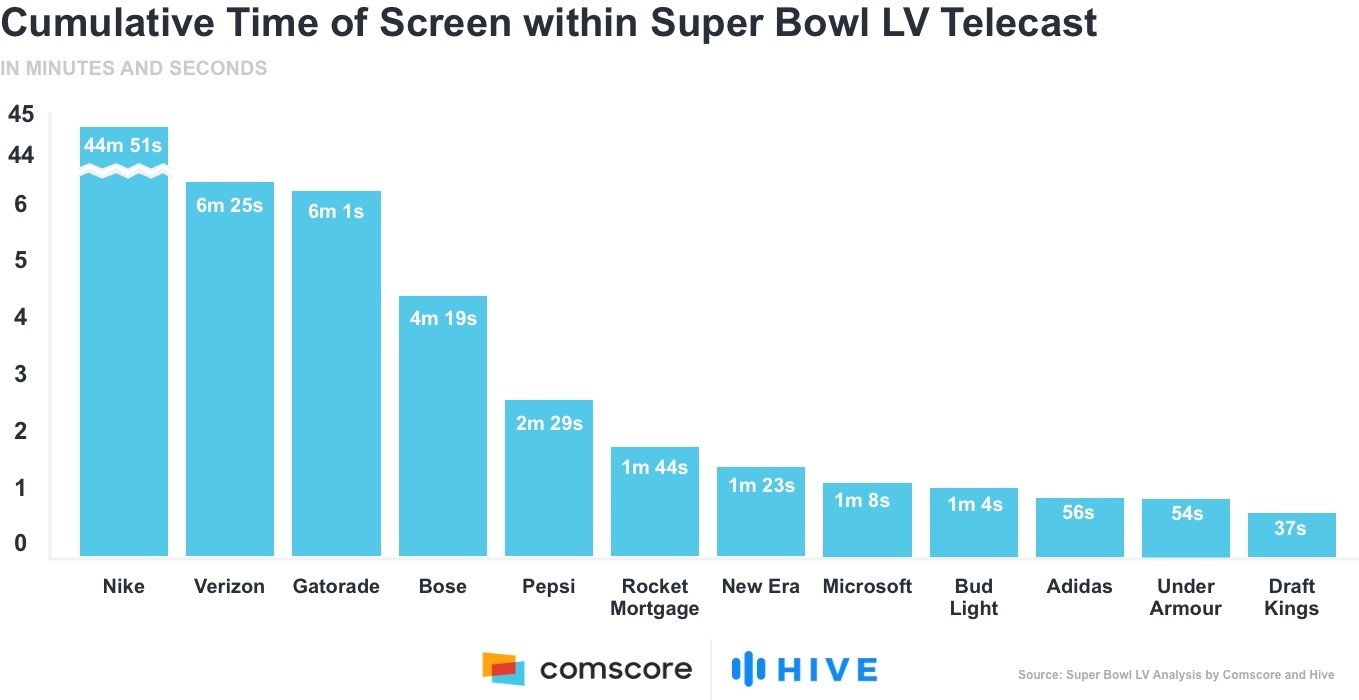 While COVID-19 significantly changed the game day experience throughout the 2020 NFL season and Super Bowl LV, the reduction in fans appeared to boost the level of TV exposure for the league’s sideline sponsors. In yesterday’s game, Gatorade (on bottles, cups, coolers and towels) and Bose (on coaches’ headsets) totaled more than 10 minutes of time on screen, up nearly 60% from last year’s game. This continues a season-long trend, where league sponsors Gatorade, Bose, and Microsoft – which each have branded products and signage placed on sidelines – collectively experienced a 33% increase in their cumulative seconds of screen time per hour during the 2020 NFL regular season and playoffs.

About Comscore
Comscore (NASDAQ: SCOR) is a trusted partner for planning, transacting and evaluating media across platforms. With a data footprint that combines digital, linear TV, over-the-top and theatrical viewership intelligence with advanced audience insights, Comscore allows media buyers and sellers to quantify their multiscreen behavior and make business decisions with confidence. A proven leader in measuring digital and TV audiences and advertising at scale, Comscore is the industry’s emerging, third-party source for reliable and comprehensive cross-platform measurement. To learn more about Comscore, visit www.comscore.com.