By now everyone is aware how smartphones have ushered in a new digital age of mobile technology. Online engagement on mobile devices surpassed desktop in 2013, and the majority of our digital media consumption now takes place specifically on apps. Mobile, and the smartphone in particular, has already revolutionized the news, video, social media and transportation industries, just to name a few. While this technological shift has received a great deal of attention (and deservingly so), there are a number of less talked about – and perhaps less sexy – everyday physical products that the smartphone has rendered virtually obsolete.

Think about your daily life for a minute: When was the last time you wrote down your plans in a paper calendar? Do you still use that radio alarm clock sitting by your bed? Do you still rely on that old MP3 player to listen to your music? Do you print out directions or refer to a paper map when traveling to an unfamiliar destination? Chances are that you used to practice most of these behaviors regularly, but have since gradually consolidated them into your smartphone. Old habits certainly die hard, but perhaps the exception to this rule is when something unmistakably more convenient comes along that gives you the same (or better) functionality as the old way of doing things. Why carry around a dozen separate tools when one Swiss army knife fits perfectly in your pocket? 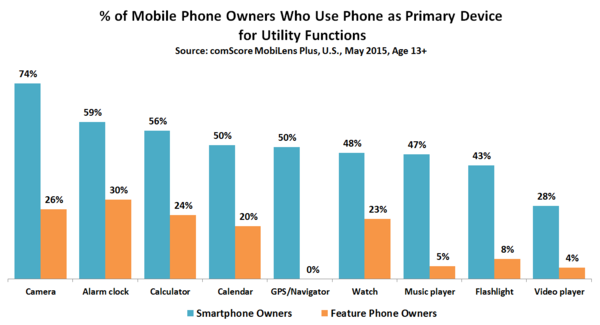 Although the feature phone has been in existence the better part of two decades, only a few of its features – namely calling and texting – radically changed how people behaved. As technology improved and smartphones were introduced, the infrastructure was suddenly there to allow many common utility products to flourish in a revolutionized digital form. For example, Comscore MobiLens Plus data indicates that 74% of smartphone owners currently use their phone as their primary camera, versus just 26% of feature phone owners. The higher resolution camera in smartphones and the ability to upload photos to social media make it a worthy substitute for a digital camera, whereas that wasn’t the case with the feature phone.

The benefits of using some of these other utilities on one’s smartphone have become evident for most consumers, as well. Your smartphone’s calendar can automatically sync up with your Facebook events and alert you for your appointments, map applications allow you to you have your GPS on you at all times, and tools like the flashlight and calculator are easy to access and use when the appropriate situation comes up. 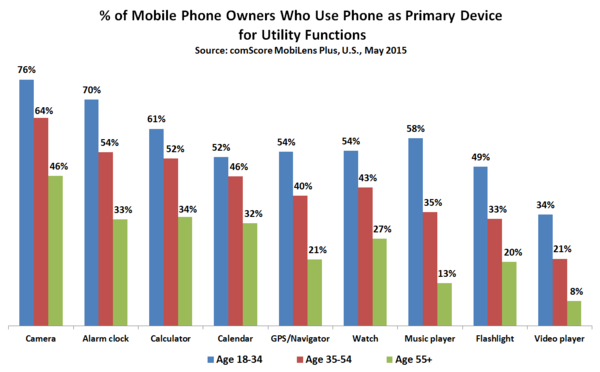 Across the board, we’ve seen that it’s the younger, more tech-savvy users who are most likely to rely on their phones for these various functions. There is an especially wide gap between Millennials’ usage of phones for listening to music, though that might be driven as much by their overall likelihood to listen to music as it’s driven by their device proficiency. But they are also a lot more likely to use their phones for GPS/navigation and even more mundane uses as checking the time or as a flashlight.

Overall, it’s clear that the smartphone revolution isn’t only affecting digital media consumption but also our daily behaviors from the physical world that have now migrated to digital platforms. For more information about  MobiLens Plus, including insights into other mobile behaviors, please reach out to your Comscore representative or  contact us online.