Apple currently has more iPhone users in the U.S. than at any point in history, and it’s been the iPhone 7 models driving its most recent growth push. As reported in Comscore’s recently released 2017 U.S. Cross-Platform Future in Focus report, the iPhone 7 and 7 Plus accounted for 15% of the 85.8 million U.S. iPhone owners ages 13-and-older in Q4 2016. 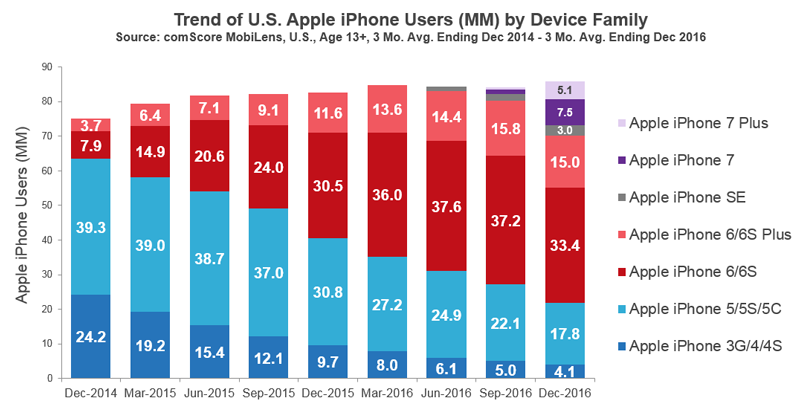 Before the release of the iPhone 7 models in September, the iPhone 6 device family had continued to rapidly expand its footprint. According to Comscore MobiLens®, there are still nearly 50 million iPhone 6 users, in addition to the more than 20 million iPhone owners who have a 5 model or earlier. These 70 million collectively represent a huge base of users who are ripe for an upgrade cycle later this year when the iPhone 8 is expected to be released.

Because expectations are so high with this upcoming iPhone 8 upgrade cycle, many news outlets and analysts are referring to it as a “supercycle.” The rationale behind these expectations is that the release of the iPhone 6 led to a boom in Apple’s iPhone installed base. Now many of those device owners are prime for an upgrade after 2+ years with the iPhone 6 or earlier models. Several features such as edge-to-edge display, a faster processor and wireless charging have all been rumored for the iPhone 8, giving users of older iPhones a compelling reason to upgrade once this new version is released.