Comscore recently released its monthly ranking of U.S. web activity on desktop devices for the top online properties in September, and while these desktop rankings can tell us a great deal about consumer behavior on the Internet, it is becoming increasingly important to account for mobile (i.e. smartphone and tablet) activity for a more complete picture of digital media consumption. More than half (54 percent) of the digital media population now uses both desktop and mobile devices to engage with content each month, signifying our recent shift to a multi-platform majority in the U.S.

Comscore Media Metrix Multi-Platform data offers this valuable, comprehensive view of unduplicated audiences across platforms. Below is the latest ranking of the Top 50 U.S. digital media properties according to their combined desktop, smartphone and tablet audiences.

Some of this month’s key insights include:

To learn more about the multi-platform majority and the ongoing shift to mobile, click here to check out our latest whitepaper, Marketing to the Multi-Platform Majority: How Media Companies & Marketers Can Navigate the Brave New Digital World. 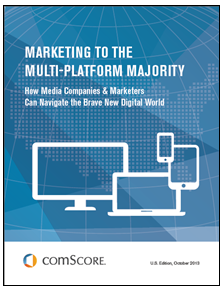